By EINSTEINRAJJ (self meida writer) | 28 days 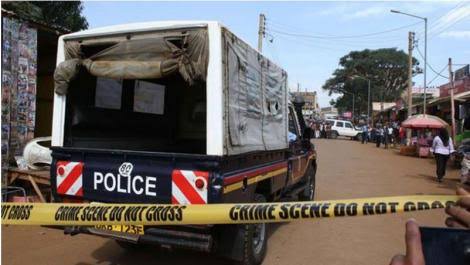 A 32 year old man, Denis Kioko, was fatally stabbed by an 18 year old boy in Naivasha. Police report indicated that the two had an argument where Kioko accused the eighteen years old of having a love affair with his(Kioko's) wife. Kioko, as police report indicated, called the young man into his house telling the 18 year old that they were going to discuss work related issues. Things changed while the two were in the house and Kioko grabbed a knife and forced the boy to confess that indeed he was having a love affair with Kioko's wife. Just like any other human being, the boy tried to defend himself and in the process the 18 year old grabbed the knife and stabbed Kioko I the neck. Kioko's life was brought to a tragic end and upon arrival of the police, the body was taken to Naivasha morgue. The young boy was arrested and he is currently in police custody. In an attempt to defend himself, the boy told Naivasha police officers that he was forced to kill Kioko since Kioko threatened to kill him. Currently the boy is still held in custody as police dig deeper into the matter to find the motive behind the crime.

Content created and supplied by: EINSTEINRAJJ (via Opera News )

7 Symptoms Of Meningitis That Every Parent Should Know About