Masten Wanjala’s Father: I Am Not Sure if My Son Is Dead

By Rumuruti.news (self media writer) | 9 months ago 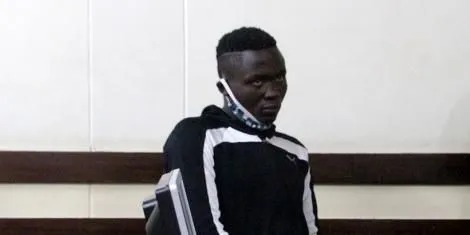 Almost a month since self-confessed serial killer, Masten Wanjala, was lynched, his father, Robert Wanjala, has opened up on his son's death.

Speaking at his home in Bungoma County, on Tuesday, November 9, Wanjala made it known that the law enforcement officers handling the case have never approached him to positively identify the deceased's body.

He decried that since the lynching ordeal on Friday, October 15, at their Mukhweya village, Bungoma County, two days after Masten escaped from Jogoo Police Station in Nairobi, he has never even seen the body of his son.

Wanjala stated that the police went further to conduct a forensic examination on the body without involving him, and that has left him in doubt if it is really his son who was lynched.

" I have not confirmed if Masten is dead. I can only make plans if I am sure that he is dead. I'm not aware who confirmed the incident up to date," Wanjala stated in regards to the burial plans.

His father, however, revealed new details about his last encounter with Masten. Wanjala noted that his son opened up to him, sharing that he was introduced to cultism by a close relative. The cult compelled him to murder all the kids he confessed to having killed.

"He told me that he was introduced to cultism that was pushing to commit all the murders. But he asked me for forgiveness and extended the same to his mother," he stated.

The father has gone ahead to issue fresh demands before he accepts to bury his son. Wanjala insisted that the police must explain in detail how Masten escaped from the Police cell and ended up being lynched in Bungoma.

He also demanded the police clarify reports that his son was seen a week earlier in a market before he was later lynched.

"The police need to explain how Masten escaped from Jogoo Road Police Station and found his way to Bungoma where he was lynched. They also should clarify reports that he was spotted here in the market by the locals."

Wanjala has stood his ground claiming that he will not bury Masten unless the police issue a detailed statement on the same.

On the cost of the burial and all the traditional rituals expected to be conducted before the burial, Wanjala demanded that the government should incur all the costs.

"The government should facilitate all the burial plans and cater for the budget that will be brought forward on the traditional rituals conducted on his body before being laid to rest."

Residents had indicated that Masten was spotted in the area and even dined at his grandmother's place.

"The family told us that the deceased was spotted at the grandmother's home last week and was even served food," a resident stated. 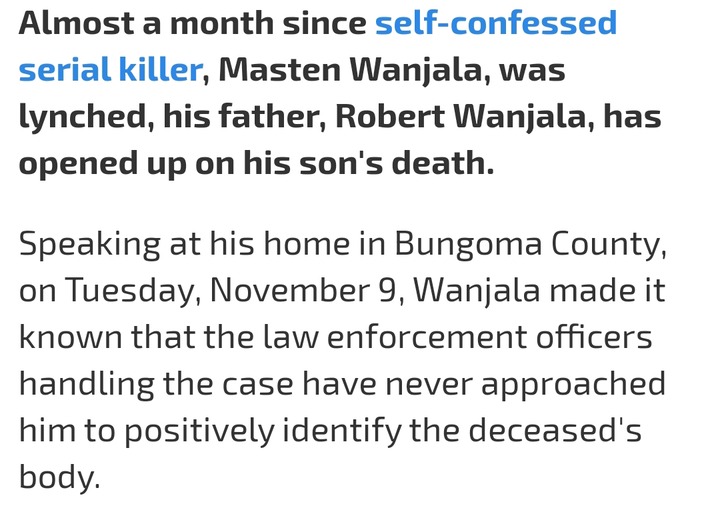