By NancyLwambi (self media writer) | 3 months ago 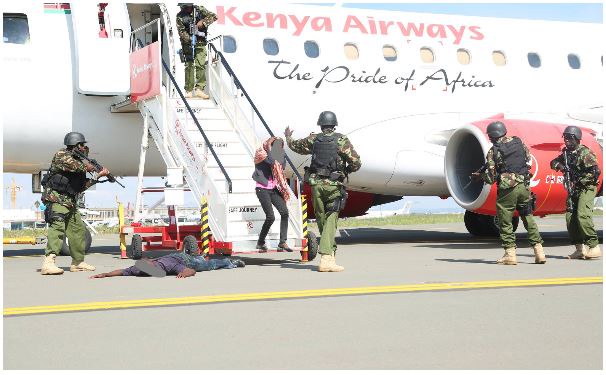 Police and suspects at JKIA in the past

A suspected money laundering suspect is in police custody after DCI detectives nabbed him while trying to flee the country.

According to the DCI report, the suspect, Khalid Jameel, a Pakistani National, jetted into the country while travelling on a Bahrain passport on January 13, 2022.

He then flew to Mombasa where he spent some days, and while there, he tried to deposit a huge amount of money in a bank in the coastal city.

However, the bank declined the amount after he failed to explain the source of the money

The foreigner flew to Nairobi and tried to deposit some money to another bank in the capital, but just like the first one, he was again, turned away after he failed to tell where he sourced the money.

Drama ensued when the many tried to fly out of the country with the cash stashed in his suitcase.

"Yesterday January 27, Khalid went to JKIA customs offices to inquire on travel requirements to Bahrain, an archipelago in the southwestern coast of the Persian Gulf. He finally secured a flight to the island via Cairo, scheduled to leave the country today morning at 0730hours," DCI said in part.

DCI noted that he failed to explain the source of Sh110 M in U.S dollars he had stashed in his suitcase