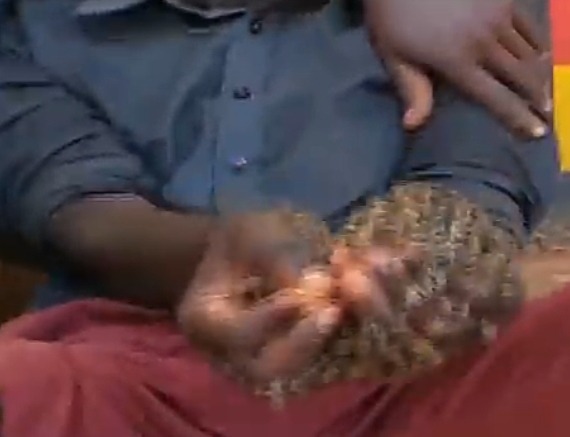 Drama ensued yesterday at Makutano market in Embu County after two men sespected to be cattle thieves handed themselves to the police. The duo arrived at the police station accompanied by the cow which they had stolen.

The incident happened after one of the owners of the stolen cattle sought help from a traditional doctor so that she could get her cattle back.

One of the men had a swarn of bees on his hands and seemed to be struggling with severe pain. The owner of the cow identified as Lilian Waithera said that she had reported to the police that her animal was missing. She said that she waited for long but the investigation by police bore no fruits. That is when she decided to seek assistance elsewhere. She stated that she called a traditional doctor who gave her traditional 'medicine' which enabled her to track down the thieves.

The incident turned more dramatic after a man who is said to be the witch doctor surfaced. The man took out his items to set free the two men who had been 'arrested' by his bees leaving the residents shocked.

"I gave the woman some medicine and told her to place it in the cow shed. I formed her that the medicine would work within a week." the traditional doctor said.