The Kisumu County is in mourning this afternoon after the latest report that we have just received about the death of one of the top officials from the National Government in the area who has died under unclear circumstances.

The reports indicate that the senior government official was found dead in his house and it is not yet clear what happened to him leading to his death at the house.

The Deputy County Commissioner of Nyakach, was found dead inside his home moments ago and police have begun their investigations after condoning off the scene to the public who have milled around the area.

According to the reports that we have from The Standard Newspaper this afternoon, the Deputy County Commissioner is known as Sylvester Munyasia.

The cause of death has not yet been ascertained by the authorities but he has been taken to the mortuary with investigations commencing immediately on his death.

The County Commissioner of Kisumu, Josephine Ouko, has confirmed the news that has shocked residents of the quiet neighborhood.

Scanty details have been released on the death of Sylvester Munyasia who, until his demise this afternoon, was the Deputy County Commissioner in Kisumu County as per the reliable reports that we have been able to gather. 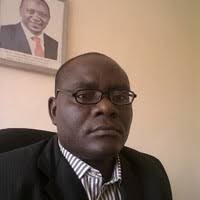 Picture courtesy. Deputy County Commissioner of Kisumu County, Sylvester Munyasia who has been found dead in his home.