Why parklands residents are up in arms against a proposed multimillion-apartments.

By EDU-KANTAI (self media writer) | 1 month ago Residents of Taza lane, city park drive in parklands within Nairobi county are up in arms against the ongoing Multi-million house project on the ground that they eere never consulted, the project has not fully complied with the required laws and it has not openly showed how its sewerline will operate.

They are wondering how NMS approved development of 91 4&3 bedroomed apartments in an area with no sewerline.

The building Will accomodate more than 700 people once completed hence raising health issues.

Ironically structural engineer's letter and also the Architect's letter confirm they have not been involved in the project from the Start yet their Names were posted on the site board to hoodwink the public on the project legality. 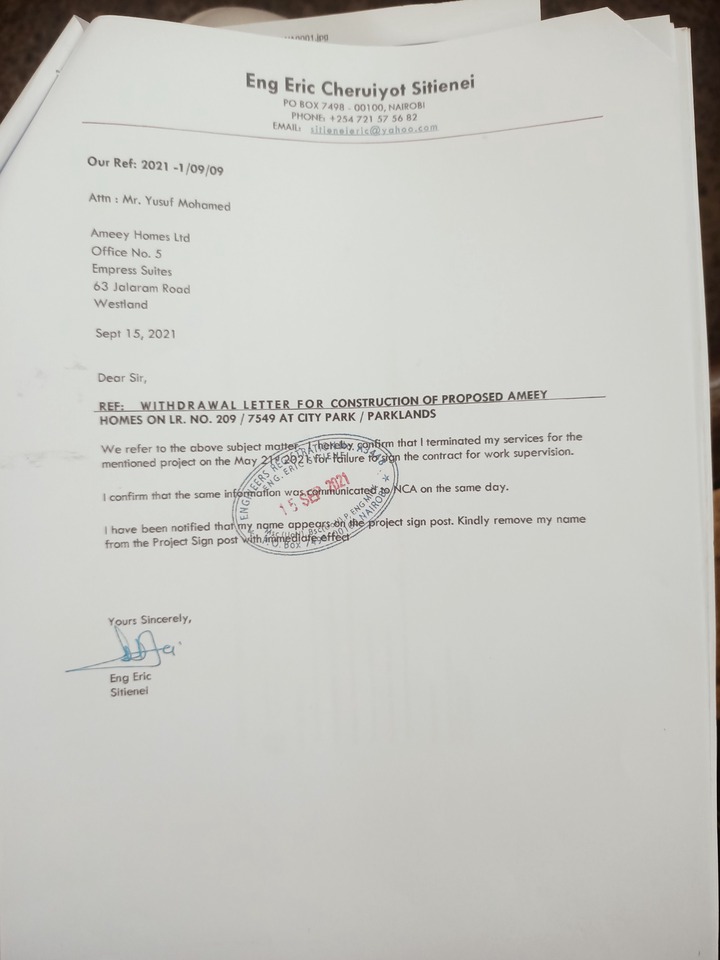 "We refer to the above matters. I hearby confirm that i terminated my services from the mentioned project on May 21,2021 for Failure to sign the contract for work supervision, i confirm that the same was communicated to NCA on the same day, i have been notified that my Name appears on the project sign post . Kindly remove my Name from the project sign post with immediate effects," said one of the engineer's.

Residents now wants NMS and NCA to immediately Issue orders stopping any further development , condemning the site and odering the demolition of the structures.

"We want the authority responsible to act before its too late, let the structures be brought down and allow legal process to take place," Amos Wekesa, a resident said.

They further claims that the building is being constructed at a highspeed hence raising security concerns.

More so residents have also complainant of harrasment by the police whom they accused of siding with the contractor whom they believe is doing an illegal constructions.

"We were recently arrested and accused of stealing metals but the real thing is it was Only some intimidation tactics," one of the residents said.

"Just observe and see, the sign post has no engineer , the one who was their distanced himself from the projects and his name was also removed from this signpost this morning, We feel that something fishy must be going on," Moses Siakama said.

He added that as residents have not been involved in the entire projects and their issues ignored.

"They don't have a proposed sewerline so how Will people survive here after the constructions, We have reported the matter to various authority and We have tangible information that the projects is illegal," he added.

Residents have also made complains to the NCA, Nairobi water and sewarage company and the NMS on the same.

They are now calling on the National government to quickly swing Into action and investigate the entire project and stop is for the benefits if their health.

"We need to have everything done in an open and transparent manner, We call upon the office of the DCI to investigate this project by subjecting everything to serious research and analysis, if this project proceeds in this manner its not Only Riaku but environmental hazard" said Alfred Ndabiri a resident an immediate neigbour said.

Ndabiri also questioned the manner in which the electric posts were erected and urged on the responsible authority to move with speed to prevent Future calamities.

"We have seen more building collapsing as a result of quick and illegal constructions, let US stop further calamities," he added.

Opinion: Why Nairobi County Government Has Been Tough on Bodaboda Riders within the CBD

Be Careful with these Red Light Behaviours by Strangers in Nairobi

Uganda: Police Officer Collapses After Falling Off A Truck During an Arrest