By Githuria.45news (self media writer) | 3 months ago 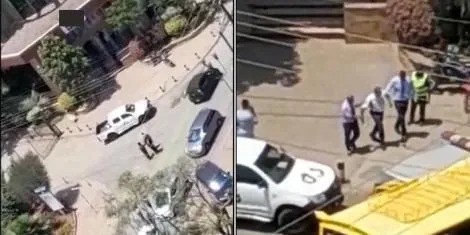 Police stated that the knife-wielding man, who attempted to rob a bank in broad daylight on Tuesday, October 11, posed as a customer before gaining access to the premises.

Addressing the media, Lang'ata OCPD Monica Kimani stated that the assailant passed by the guards, circumventing security measures set up at the Nairobi West facility.

"While being searched by a security guard, he drew the knife and stabbed one watchman, then went straight into the bank," Kimani explained.

The middle-aged man then proceeded to hold customers hostage and stabbed one of them who was in the queue before aggressively approaching a teller.

In a well-calculated move, he found his way straight to the bank's operation manager, demanding money. However, law enforcement officers responded to the distress call on time.

"One of our officers asked the assailant to surrender and drop the knife, but he didn't. In the process, he charged towards prompting him to open fire to disarm him," she added.

Following the attack, four people who were left nursing serious injuries were rushed to nearby hospitals within the city.

Law enforcement officers also launched investigations into the matter, with detectives analysing whether the attempted robbery was an inside job.

They are also reviewing the area's CCTV cameras to establish if the attack was pre-planned and whether the man was a frequent visitor to the bank.

The Nairobi West bank closed the branch to allow investigations to take place.

"Kindly note that we had a distressing incident today morning at our Nairobi West Branch where an armed person attempted to gain access into the banking hall.

"Security agents led by local authorities are currently on site investigating the incident and the branch has been temporarily closed," read the statement in part.

Content created and supplied by: Githuria.45news (via Opera News )