Ruhollah Javidi Rad, Mohammad Sayadi Baghansgani, Mohammad Hosseini and Mohammad Watandoost have been executed by hanging in Iran for [email protected] a woman in front of her husband whom they forced to watch the horrific scene having tied him up.

The horrific attack took place while the couple were climbing a mountain in the Khorasan Razavi province of Iran.

According to investigations from the police, the four men identified above were hanged on Monday, March 16 according to Iranian media.

The defendants were rounded up by police and were charged with the kidnapping and [email protected] of a woman and with threats of violence towards a man.

Reports from the police said the [email protected] had tied the man’s hands and feet together before seksually attacking his wife in front of him.

The Criminal Court of Khorasan Razavi sent the case to the Supreme Court where the four culprits were sentenced to death by hanging in Mashhad Central Prison.

In this country, it is usually unheard of occurrence for men to be prosecuted over seksual crimes as the laws are normally structured to work against [email protected] victims who often face counter charges of adultery, indecency or immoral behavior after reporting a seksual assault. 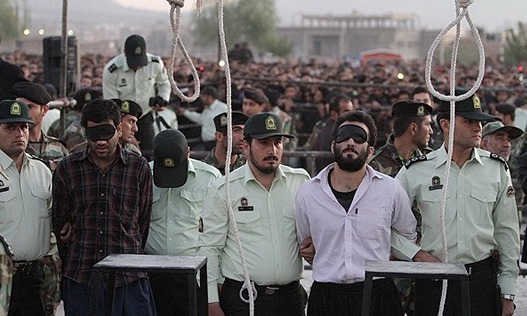 Convicts sentenced to death by hanging in Iran. Image: Courtesy

Those found guilty of the act are usually only convicted with the testimony of four male witnesses, or a combination of male and female witnesses.

Iranian regime executes more people per capita than any other country. In fact it has been ranked one of six countries in the world to execute people found guilty of [email protected]

KBC Journalist in Trouble as the High Court Issues an Order

JUST IN: Relief as Court Orders Immediate Release of TUKO Editor as Another Chief Editor is Summoned

Former Keroche MD To Be Paid Ksh 45 Million After Sack