By BrianOkelo (self media writer) | 3 months ago 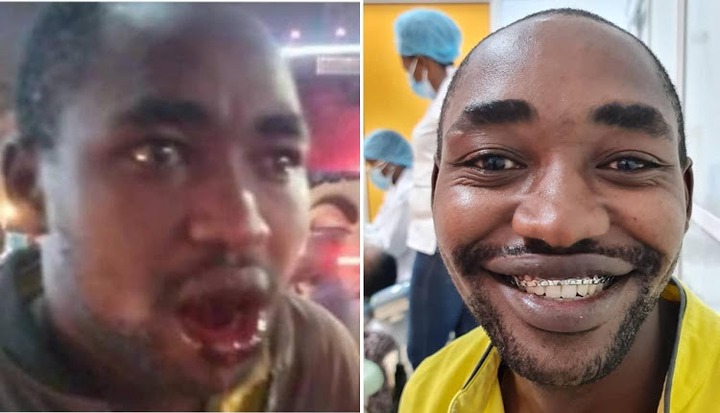 Anthony Maina, the man who was brutally beaten by officers, can finally have a smile on his face after his face was finally fixed.

Maina's face was deformed after he lost his jaw and teeth while in the hands of Nairobi Inspectorate officers who accosted him after he reportedly declined to give Ksh.100 bribe.

Giving an update on Sunday, Dr. Kennedy Carson Opiyo from Orthodontics Kenya, told a local daily that Maina was recovering after his teeth were fixed

“The young man had a broken jaw from the x-ray we took and he also had some loose teeth and deranged bite,” the doctor told the Star.

According to reports, surgery was performed to remove the broken sharp bony spicules of the jaw.

The doctor further revealed that the impact on Maina was intense that his lower jaw broke at two points.

Maina is recovering at the moment and is due for review in two weeks.

To avoid prosecution and save their jobs, the rogue officers - Humprey Muswangi, Hassan Chege, and Dennis Macharia - agreed to do an out-of-court settlement.

Maina, who sells cocks in Nairobi's CBD was accosted by the officers and lost his teeth after they reportedly demanded a Ksh100 bribe from him but he only had Sh20, so he was beaten.