By @arapoutta (self media writer) | 1 month ago

As we begin this day, let's have a flashback at a tragedy that happened on Wednesday, 21st October in Nakuru while heroes' day celebrations were ongoing in Kirinyaga county.

Report received from ktn news indicate that a form three student died after she was stabbed by her boyfriend.

According to the report, the 49-year-old Salim from Miti mingi village in Elementaita, Nakuru county, stabbed the girl using sharp knife after they developed some differences in their love affairs. 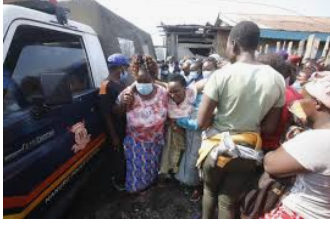 The 17-year-old form three student Naomi Nyarangi was reported to have succumbed to the stabbed wounds which were inflicted by Salim on Wednesday morning.

However, efforts of police to arrest Salim failed after he allegedly committed suicide after stabbing the young girl. Preliminary investigations reveal that the two were involved in a romantic relationship for some time, before this tragic end.

Following the incident that occurred, the lifeless body of the student was taken to the nearby mortuary awaiting for postmortem examination.