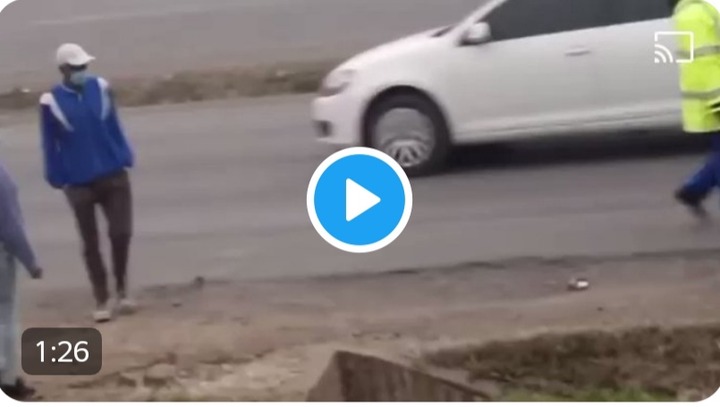 Corruption in the Country has been one of the critical issues affecting development, and undermining the ethics in our society. The Deep rooted behavior which is witnessed from the top leaders all the way to ordinary Poor Kenyan has been the norm of the day, and the way of living.

The few People who have been calling for efforts to stop the Culture have also been absorbed into the system because their little voice is not heard by the bigger population which is deeply corrupt in all sectors from Education, Job Sectors, Transportat and other crucial parts that attract Many people in terms of employment.

Being one of the sectors that has been affected by Corruption for decades, The transport Industry has been on the spot severally where traffic Officers have been seen on Camera and even got red handed while taking Bribes from Vehicles ranging from commercial to private ones.

A similar Video that was circulating on social media however revealed a new tactic that is being used by police to collect the Bribes from passing Passenger service vehicles operating in Nairobi and the outskirts including the neighboring Countries.

In the Video which was taken by a young Kenyan who was hidden nearby in Kangundo road, two traffic Police Officers who were in Uniform were standing by the road side while taking to each other. They were then seen moving on one direction where the Cars were coming from.

The male Officer then stops a Toyota Nissan Car full of passengers and continues with conversation with His Fellow Counterpart. Two young people, a Man and a Woman are then seen jumping inside the Cars and collecting Money and moving out.

A Light blue Mini-bus arrived in the scene and the Man who was wearing a Blue Sweater quickly followed the Car and handed money by the bus Conductor. The Bus then speeds off to the road to continue with the Journey. 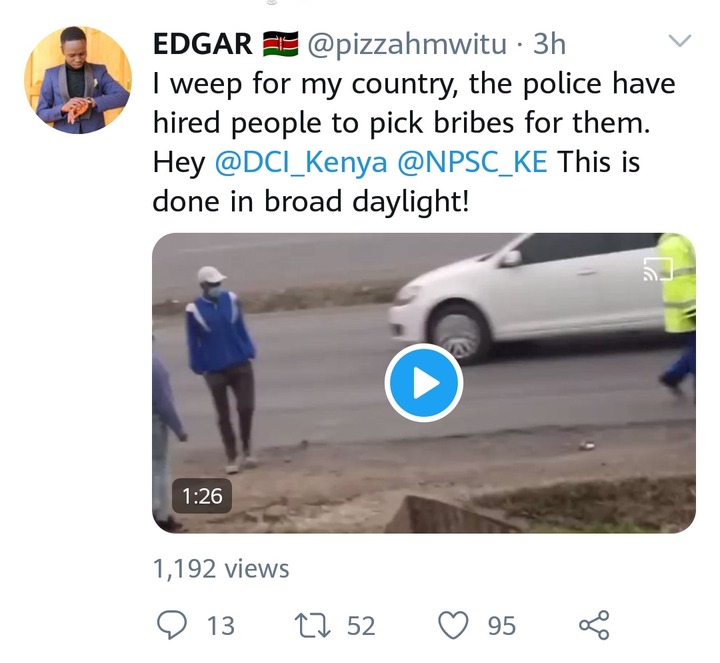 A Kenyan Who goes by the name Edgar tools to His twitter handle lamenting about the whole occurrence whole tagging the Official handles of the Directorate of Criminal Investigations. He said that He is very sad that Corruption has become toxic in the Country to an extent of police Officers hiring Young Kenyans to collect those Bribes for them.

The Investigative body has not reacted to Incidence even after the calls by Kenyans to give a quick response on the same. The full identity of the two Kenyans and also the traffic Officers has not been revealed since the exposure and Kenyans calling Fri their arrests.

The lawlessness in the Kenyan roads has also been contributed by such acts because Police allow Drivers to break traffic rules by Overspeeding and and overloading because they take Bribes to cover up for Their mess. This behavior has increased in the past to extends that has instigated public outcry.

The link below provides the lead to the Video :