He Had Just Married, Details Emerge on Man Thrown off 6th Floor of Club 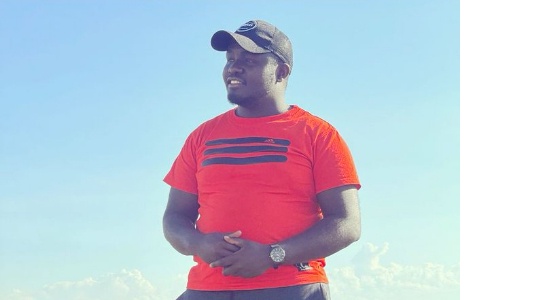 Detectives from the Directorate of criminal investigations have nabbed three suspects in connection to the murder of a civilian who was thrown off a 6th floor of a club called Wingu Bistro in Ruaka as CCTV footage emerges. Detectives launched investigations on the mysterious circumstances the man who has been identified as Brian Macharia lost his life on Sunday, September 26. This is after his body was found lyimng six floors from where he was last spotted alive enjoying himself. Macharia was allegedly thrown six stories down from the popular night club.

According to a CCTV footage obtained from the scene the security guards popularly known as bouncers are seen manhandling the victim and bundling him into the club's storage room. Reasons for manhandling of the victim still remain not clear. In his last moments as captured by the CCTV camera , Macharia was spotted having good time in the club before making his way to the Kitchen area. 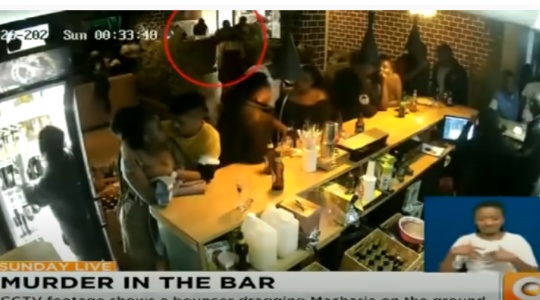 He is then seen having a talk with one if the staff members befor it quickly turns into a violent confrontation. The member of staff, who is behind the counter, signals the security guards who respond swiftly and begin dragging the reveler out of the night club.

The CCTV footage shows the victim engaging the security guards in a conversation but everthing seems to degenerate with them ejecting him from the club and tearing his shirt in the process. Overpowered by the guards, Brian is dragged out of the club and manhandled in the process. One guard is seen punching the victim before a second security guard joins in assaulting the helpless man. 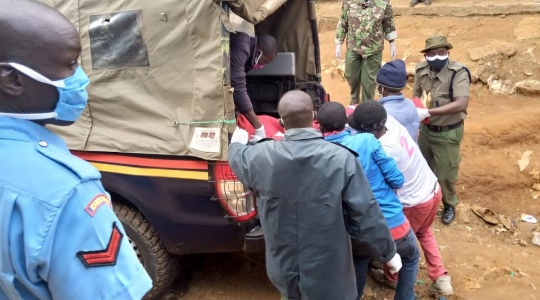 Other revelers who tried to intervene and rescue the victim were also roughed up in the process. However, their persistent efforts saw them help him get back on his feet. The shirtless victim then attempted to make his way back to the club but the same security wrestled him to the ground. Two more security guards come in and bundle Brian to a storage room within the club’s premise.

Although bleeding, the victim gathers the little strength he has and manages to temporarily free himself from the guards. Unfortunately, he is accosted by the same guards who throw him back to the storage room despite the protests from some of the revelers and the club's staff who had gathered around the fracas.

The mystery remains on what happened a few minutes after he was locked up in the room . His body was found lying lifeless six stories below. His father-in-law, Richard Wachira, told the media that the victim had broken arms and legs as well as bruises around his waist.

"According to the members who saw whatever happened, they said that Brian, dropped dead," he stated.

Police have since nabbed three people in connection with the death among them one of the club's owners, a security guard in the footage and one member of staff. The club's licence has also been revoked even as post-mortem report shows that Macharia died of multiple organ injuries. 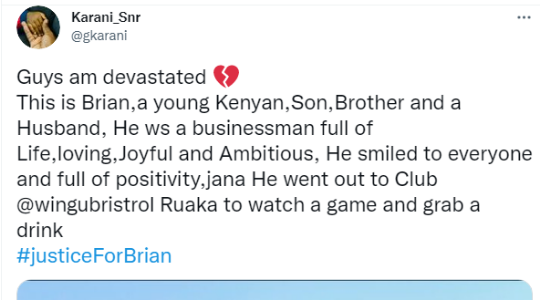 Brian’s relative identified as Martin King’ori revealed that he had he had bad injuries around his waist and that his arm was broken thrice. According to Brian's father-in-law Richard Wachira, the young man had just wed the love of his life

"He was a young man who had just gotten married, He did not even have a child. It's a young life lost."

The incident sparked uproar with a section of Brian’s friends taking to social media to demand for Justice . However others blamed the curfew imposed over covid-19 for his death. 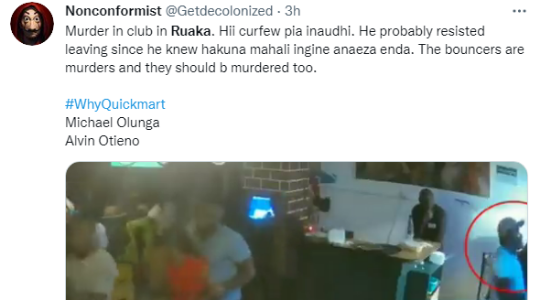 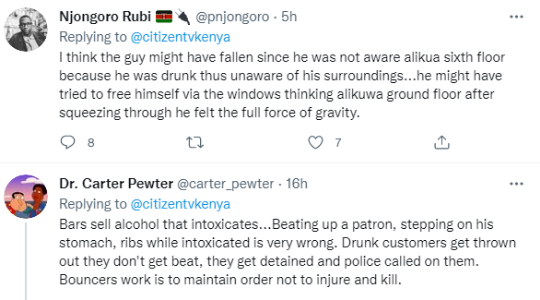 Another incident shocked residents of Kiambu two weeks ago when a man died in a bar after brawl. The 35-yearl old Kiambu High school teacher was stabbed to death after getting involved in a fight .The teacher was stabbed in the neck with a broken beer bottle during a bar scuffle.

According to an eye witnesses, the victim Edwin Gichuki was taking beer at Linkers Bar in Kirigiti centre in Kiambu where while passing past other revelers inside the bar felt like his pocket was touched like someone wanted to steal from him and reacted angrily towards a reveler who was near him. 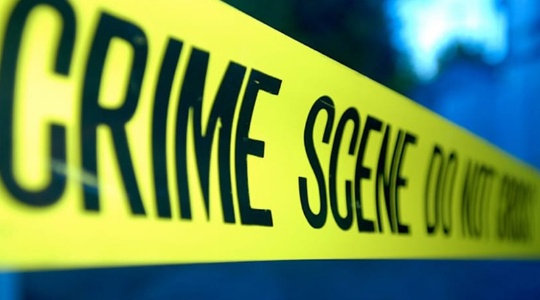 The man was passing through the bar and he felt like someone was entering his pockets to steal from him and he angrily started beating up a man who he suspected to be the one," said the witness.

How Argument Degenerated Into a Fight

Witnesses say that it degenerated into a fight which was later solved. However, the man who was beaten up went outside and came back armed with a broken beer bottles and stabbed the victim the fled the scene. It is said that the suspect said that the victim will never hit another man the way he did to him before he rushed outsider and came back armed with the broken beer glass which he used to stab the victim 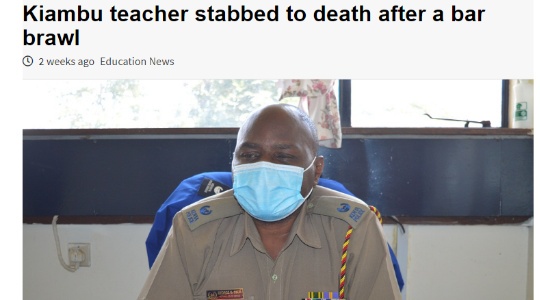 Lydia Njambi , another witness said she was heading home and saw many people rushing at the scene and found the victim lying on the floor and people were touching him to check on his condition and that is when police were called and were rushed to hospital.

"After the incident, there were a lot of people coming to see what had happened and found a man lying on the ground while oozing blood from the neck and some people were trying to help him before the police arrived and took him to hospital.I heard that someone had stabbed him after an argument which led to a physical fight and the other suspect decided to revenge," said Njambi. 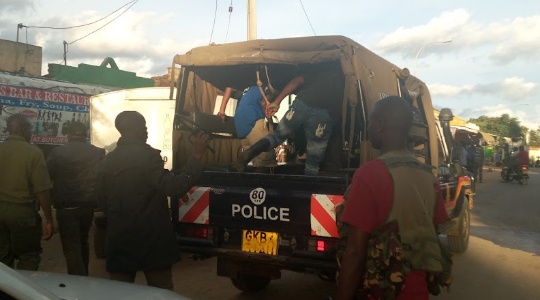 According to Kiambu county commander Kaimbu East George Osur who confirmed the incident , the tragic scuffle happened at around 8 pm on Monday 13, September 2021, a disagreement ensued between Gichuki and another person known as Maina over an unknown issue at Kirigiti Trading Centre and in the process Maina ended up stabbing Gichuki. Osur said that the victim bled profusely and was rushed to Kiambu Level five hospital where he was pronounced dead on arrival.