Opera Exclusive: How Online Market Kilimall has Become a Den of Liars, Conmen, Swindlers and Thieves

By Ombachi (self media writer) | 1 year ago

The year is 2013 and the only way Kenyans (at least the affluent and tech-savvy ones) can afford to do online purchases is via a still-new website called Jumia. And then a year later, a Jumia competitor roared into the market, bringing along with it the same business model derived from a Chinese e-commerce giant Alibaba.

Kilimall, named after Africa's tallest mountain, Kilimanjaro, was started in early 2014 by a Chinese entrepreneur who also happened to be a Huawei ex-employee. 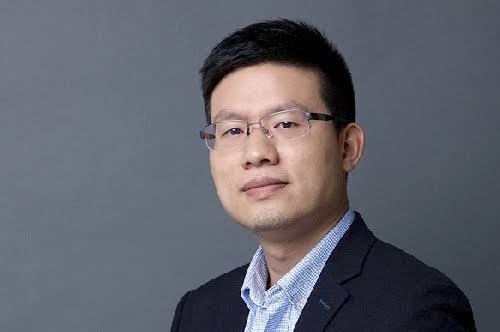 Yang Tao was not even meant to delve into e-commerce. He initially landed in Kenya on December 8, 2012 to work in M-PESA, the mobile payment service for Safaricom before the entrepreneurial bug bit him.

He was 31 when he first conceived the idea of setting up Kilimall.

The Hunan native would soon quit working for M-PESA to set up an online market after being endlessly frustrated by Kenya's shopping inconveniences. 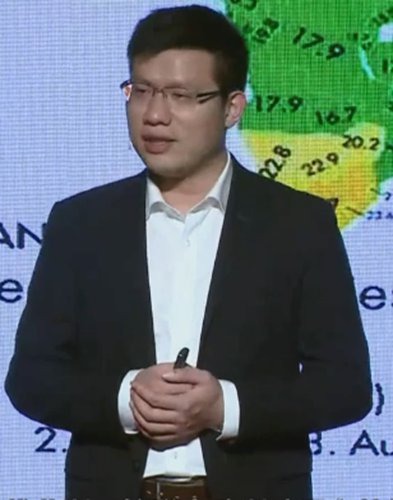 The growth was fast and exponential - in two years, Kilimall had landed in Uganda and entered the Nigerian market an year later.

Just a month after launching the website, Kilimall made its first ever sale - a blue waterproof Bluetooth speaker, an order that was placed by an Indian man working in the China Road and Bridge Corporation.

Yang, the Kilimall CEO, did the delivery himself.

Besides giving access to local vendors, Kilimall also set up a company in China to attract sellers in vibrant Chinese trading hubs such as Shenzhen, Yiwu and Dongguan. 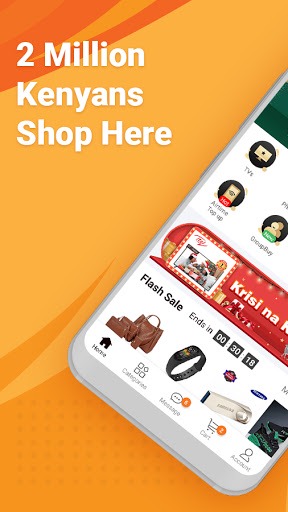 As late as last year, Kilimall had grown rapidly to become a massive business behemoth with about 10 million users and over 10,000 sellers from both Africa and China.

But as the business continued to grow and the rosiness abounded, Kilimall soon started becoming a dreaded platform where hundreds - if not thousands - of buyers started losing their hard-earned money after making dubious purchases that either ended up not delivered or even acknowledged on the website.

Opera News spoke to tens of disgruntled Kilimall buyers who told of their shopping horrors, deep disappointments, despair and anger at Kilimall's conmanship and daylight robbery. 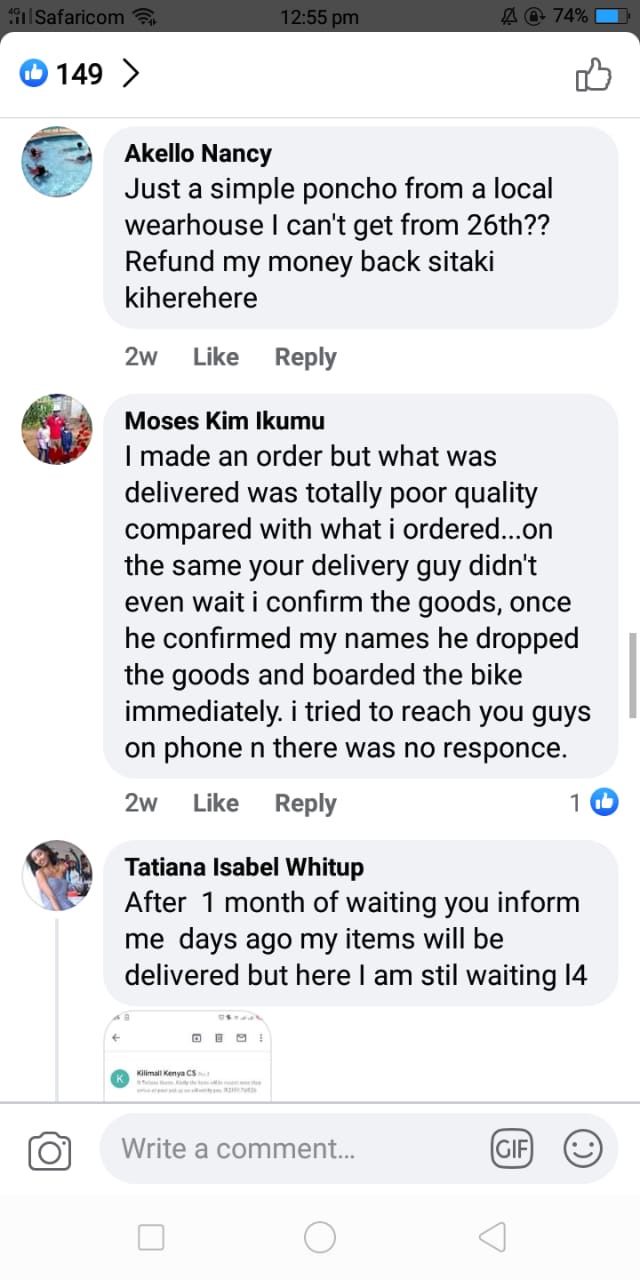 "They have become thieves. I've shopped with Kilimall since 2017 with no trouble at all. Now, in late November, I ordered for two handbags, each costing Ksh. 2500. My order was to be delivered on or about December 1st, 2020 and to this day, three months later, I'm yet to recieve the goods I ordered for. Reaching them has actually become extremely problematic. I'm losing my mind, " Grace Wambui, a Nairobi-based beauty guru, told Opera News.

"What actually sucks is just how difficult it is to actually reach them on phone or even trace them physically. I'm just tired," Anthony Githinji, who bought an Ksh. 1200 ice-watch off Kilimall, and which is yet to be delivered, said. 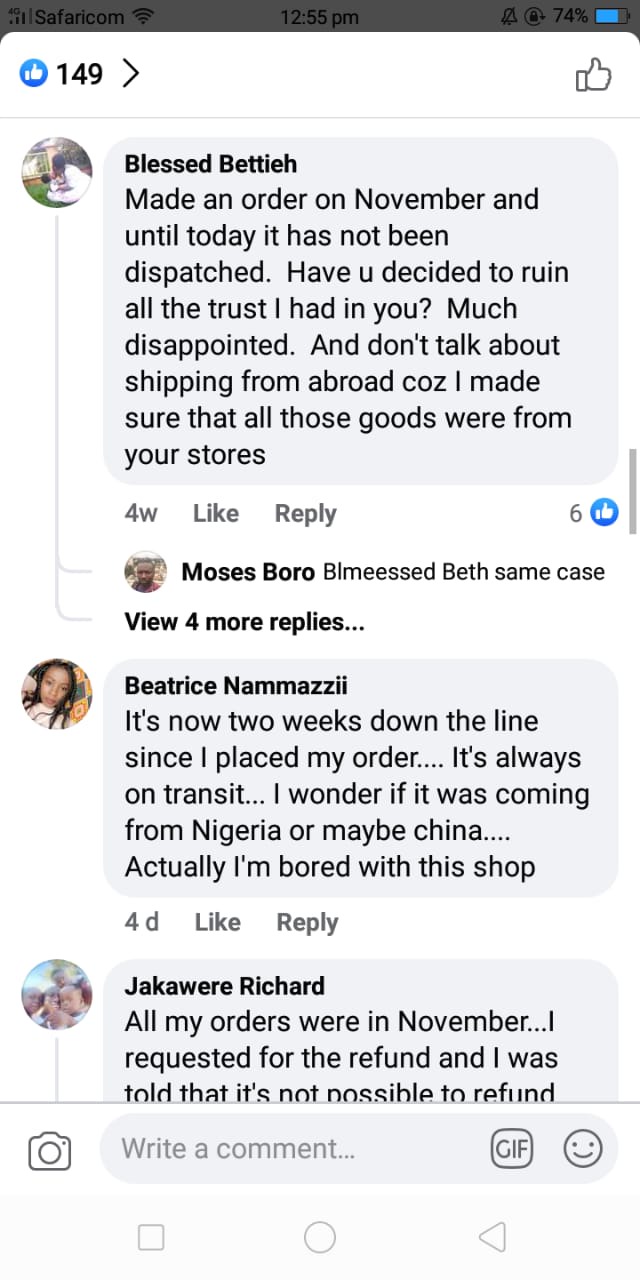 We went on the website and tried calling the number displayed as the official Kilimall customer care number 0709717001 which immediately got disconnected even before ringing. We tried endlessly, same result.

We went to Facebook too and found yet another number that Kilimall published on their official Facebook page as the business number 0707233666.

We tried it too, a somewhat confused lady picked up and categorically stated that she was in no way affiliated with Kilimall. She then swiftly hang up. 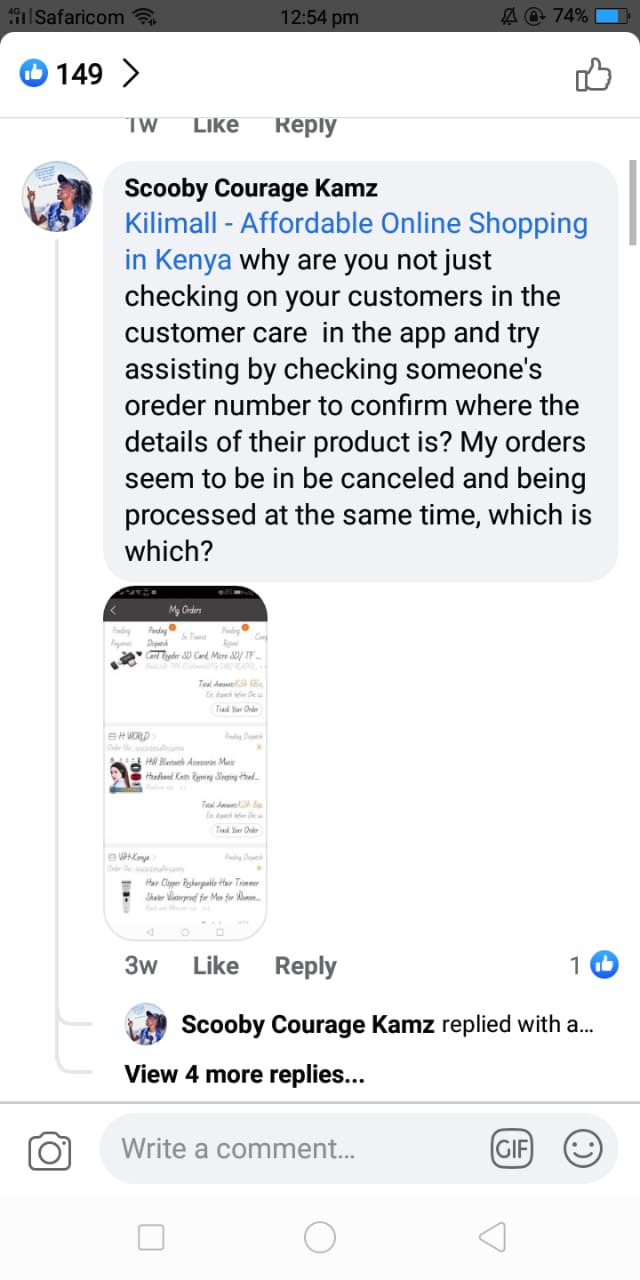 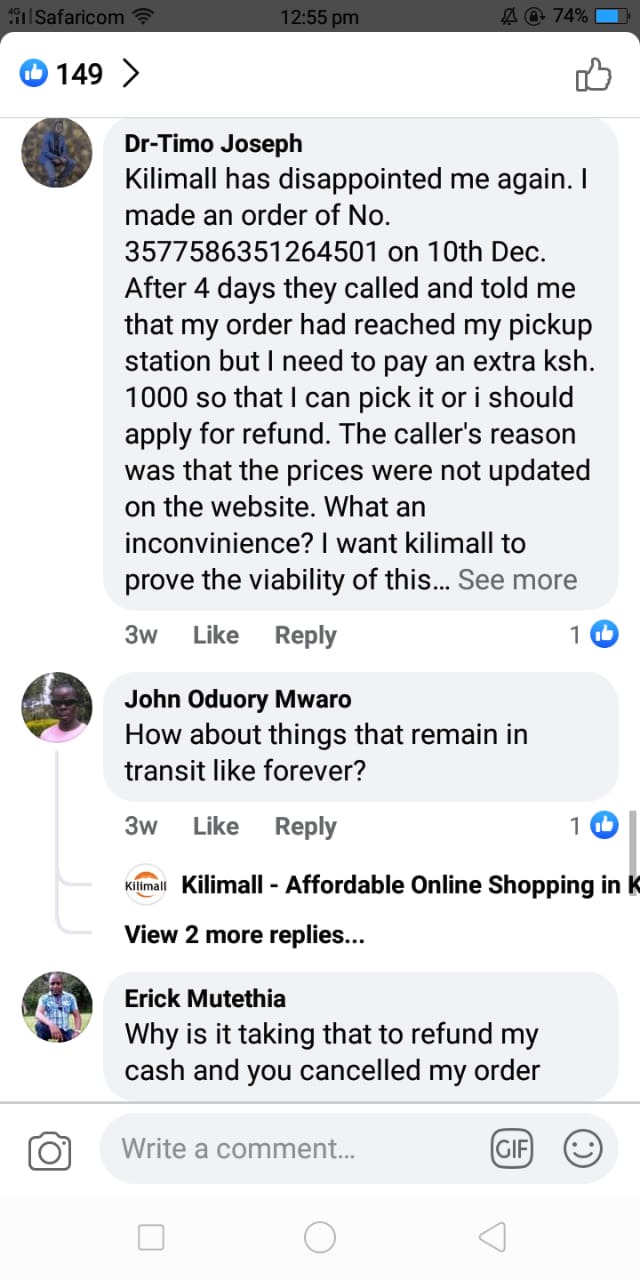 We managed to fish out yet another number belonging to who we were told was the Kilimall business manager called Peter, 0707032004. We tried calling it, it rang and rang, and eventually, after trying again, the line went "the number you have called is no longer in service."

Brenda Wanjiru, a city entrepreneur, bought two mobile phones, brand name ULE PHONE, at Ksh. 7,000 per phone, on December 22nd 2020 and has yet to receive her package, almost two full months after paying for the items.

Her desperate attempts to follow up on the mobile phones, ask for either a refund of her money or the delivery of her goods have all hit a snag.

"I was requested to take up my complaints with the customer care team via the Kilimall app. And it's all a total joke. You're either given automated responses or when a human actually replies they tend to gaslight you and take you for a fool. As if questioning your intelligence. It's crazy, "a livid Brenda told this writer. 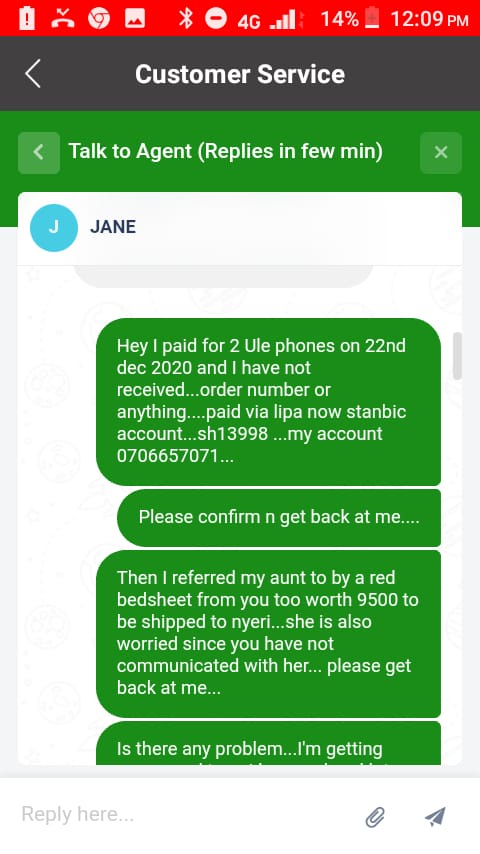 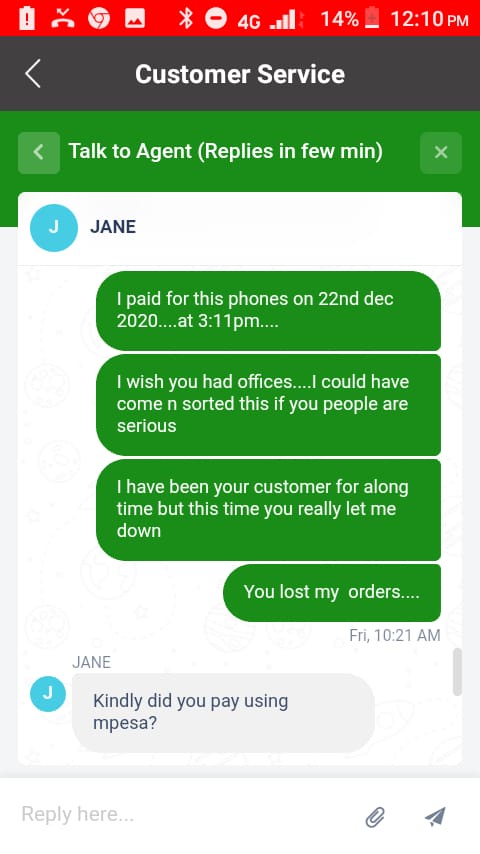 We camped on the Kilimall Facebook page (the original, verified page) and were inundated with an endless avalanche of thousands of polemical comments from disgruntled Kilimall buyers.

Some were complaining about wrong deliveries, others about faulty goods but most were ranting about purchases they made, money they had already paid and Kilimall had flatly refused to either deliver the items, acknowledge receipt of cash or even provide solutions to the stalemate.

"Kilimall has disappointed me again. I made an order of No.3577586351264501 on 10th Dec. After 4 days they called and told me that my order had reached my pickup station but I need to pay an extra ksh. 1000 so that I can pick it or I should apply for refund. The caller's reason was that the prices were not updated on the website. What an inconvinience? I want kilimall to prove the viability of this inconvinience else they need to refund me for the time I wasted waiting for the product, the extra charges incurred on transactions and the data I incured to order for this product. This is provocation actually and they are liable for it, " an angry Dr. Timo Joseph posted to Kilimall's Facebook page on 14th, December 2020. 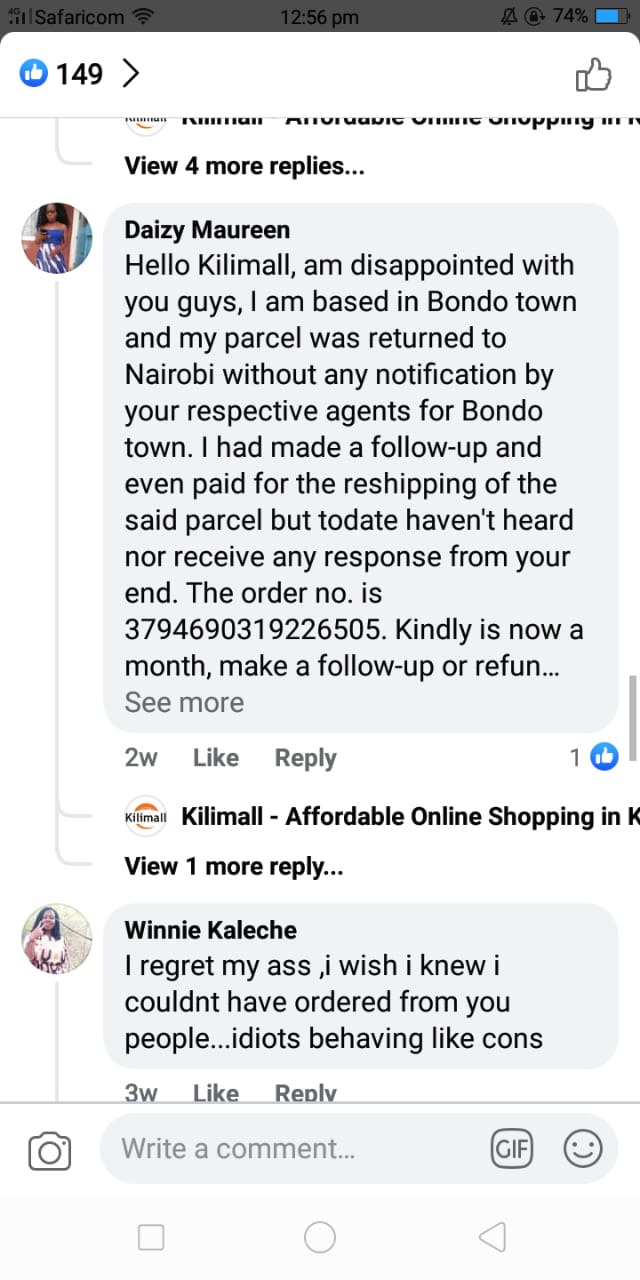 The daylight robbery currently going on at Kilimall, the open fraudulence, monkey businesses and unscrupulousness has reached imploding levels as thousands and thousands of Kenyans continue to lose millions to a shadowy company with no clear physical address, no sensible customer care agent numbers, no direct business numbers and a very incompetent marketing team.

The games are still ongoing.. And there doesn't seem to be an end in sight to this repugnant thievery.

Content created and supplied by: Ombachi (via Opera News )

Is Raila in for yet Another Political Storm from Kalonzo Musyoka