Residents of Kangemi have launched a protest following the death of 6 people who were allegedly shot dead by a Police Officer who reportedly opened fire killing several residents after which he allegedly turned the gun on himself only to kill himself using the same gun. 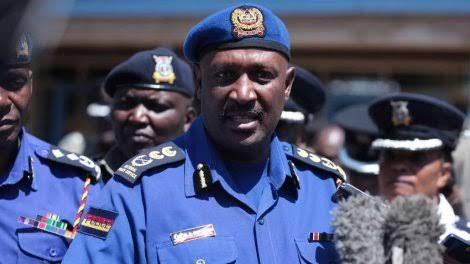 For the better part of the morning, it has been revealed that the suspect or rather the officer whose name is yet to be disclosed allegedly pulled out a gun where he begun by shooting his lover, went on a shooting spree and killed several boda-boda operators after which he killed himself.

Residents who later launched demonstrations have called upon the inspector General of police, Hillary Mutyambai to reveal what is happening and why the police officer was allowed to work despite the fact that he allegedly had an unstable mental health.

According to the reports given by these residents, they claimed that one of the police officers who got to the crime scene has revealed that the deceased police officer allegedly had several mental issues claiming that this is what might have made him do this. However, he urged kenyans to stop speculations and wait for investigations to take place.

While reacting to this incident, kenyans who took to their different social media accounts to express their opinions and suggestions on the matter have called upon the inspector General of police, Hillary Mutyambai to conduct an investigation in order to find out what happened or rather, what us causing the increase in crime among police officers.

In the past few months, a number of police officers along with the Kenya Police Force has been put on the spot due to the increasing number of crime among police officers. For this reason, kenyans have called upon the government to find a solution to this.