By kenya.newszjunky.co.ke (self meida writer) | 1 months 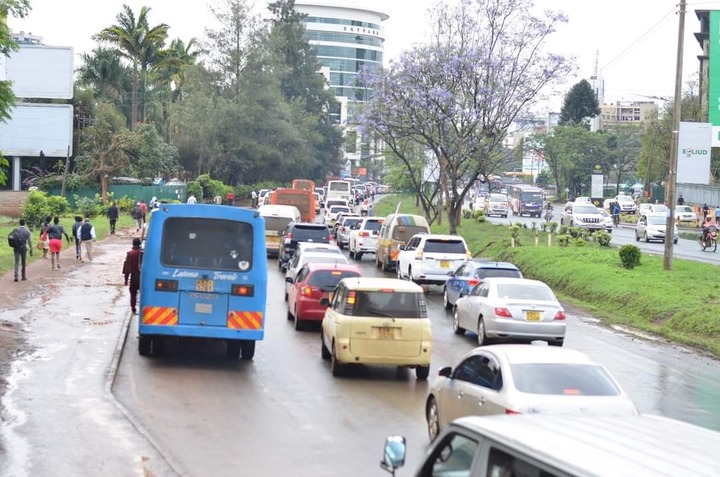 Passengers were forced to pay up to between Ksh200 and Ksh300, in an area where fare usually costs between Ksh50 and Ksh100.

Construction of the Nairobi Expressway and expansion of Waiyaki Way, frequently cause traffic snarl-ups of nearly 2 hours every day.

Kenya National Highways Authority (KeNHA), on Saturday, June 26, notified the public that the closure was aligned with the construction of the Nairobi Expressway.

Touts further defended themselves stating that the morning rainy weather was also to blame for the unavailability of vehicles. Residents, however, lamented that they were intentionally causing the delays.

Several PSVs operating along Waiyaki Way declined to be paid through mobile money, with touts arguing that commuters would reverse the money.

"Those paying via mobile money should alight, or top up the withdrawal fee," a tout directed much to the chagrin of the commuters.

The touts forcefully got rid of the said commuters, leaving them stranded midway.

Several Nairobians walked on foot, especially from Kangemi to Westlands and beyond due to the gridlock around the ABC roundabout.

The Nairobi Expressway, financed and constructed by the China Road and Bridge Corporation (CRBC), is expected to be completed by early 2022. The 27.1 km elevated road begins at Mlolongo to JKIA, Nairobi’s CBD and ends at Westlands along Waiyaki Way.

Expansion of Waiyaki Way has faced numerous delays and was projected to be completed in early 2021, a few months past its December 2020 deadline.

The Only Body Part Never Grows After Birth

Fisherman killed and his body dumped in Lake Victoria