By Chandianya (self media writer) | 2 months ago

Two police officers are being held at the Kisumu central police station on allegation of attempted robbery. 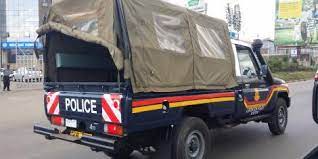 Two officers from the Sawagongo police station in Siaya were allegedly part of a four-man group that attempted to rob an Asian businessman in Kisumu.

Pravin Ramji Patel, a businessman, was reportedly approached by four men in a silver BMW with the registration KBE 420M at his workplace.

The gang members, according to sources, had two weapons. On the Kisumu-Nairobi route, the businessman has a gas station in the Buoye region.

During the robbery, the four were unable to obtain any cash.

Kisumu DCI officers, led by Kisumu County Criminal Investigations Officers and assisted by Siaya County Police Command, initiated an operation that resulted in the arrest of the two police officers.

Following his detention, one of the suspects, Michael Odhiambo, revealed the details to the police. Before two firearms were seized in a box inside a house they shared in Kisumu, the cops, who have since been identified as Albert Kimutai and Martin Murimi, were positively recognized.

They also found the clothes they wore during the attempted heist, which were captured on CCTV.

Content created and supplied by: Chandianya (via Opera News )

Masten Wanjala's Family Disowns Him, Won't Burry Him for Fear of Contacting Curse.

Used Cars that you should avoid buying in Kenya