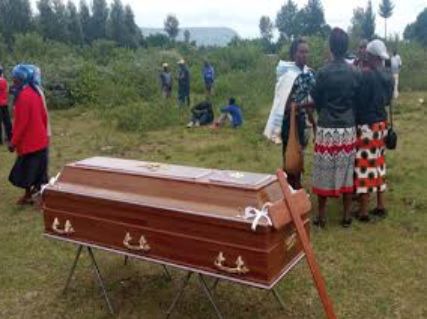 There was drama today in Rinya area, Migori County after a family disagreed on whether to bury their murdered kin or not.

The wife of the deceased and his two cousins jumped into the grave while the preacher was giving his sermon. They wanted the remains of the deceased returned to the morgue.

The deceased, Daniel Oloo, 32 was reportedly murdered and his body found the following day on a farm next to his suspected killer's home.

According to the residents, Daniel and his two friends went to the suspect’s home after learning that his lover with whom they have a eight-year-old child was in the suspect's house.

Wife and cousins wanted the burial of Daniel cancelled while his parents wanted it to proceed.

“The three went to the suspect’s house at night, one of them armed with a knife. They attacked the suspect who overpowered them and snatched the weapon. Two of them were forced to flee for their safety,” said a resident who sought anonymity. 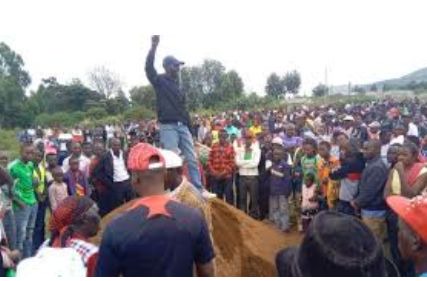 Mwangi was however left behind and it is alleged, the suspect used the same knife to stab him several times on the chest.

“According to post-mortem results, he died due to injuries to his heart. They were caused by the knife used to stab him,” said David Owino, a cousin to the deceased.

Daniel struggled to make his way home but unfortunately, he died on a farm next to his suspected killer's house. Residents found his lifeless body the following morning.

David said he accompanied the police officers from Kambogi police station to the scene where the suspect showed up with the murder weapon and admitted to committing the crime.

The matter took a new twist at the Police Station where Nancy Aoko, the wife of the deceased, said her husband's suspected killer reportedly talked with police officers and was set free minutes later.

Attempts to calm them down by the area Member of County Assembly were futile as they maintained their grounds.

“We equally want justice and truth over the matter. However, let us bury him with respect for his spirit go in peace. God will serve justice if the government system will fail,” said Chege.

The family would hear none of this even as the preacher went on with the sermon. Just before he could conclude, Daniel's wife, his cousin and brother jumped into the grave.

His wife and a section of his relatives want his killer arrested and charged.

The burial service came to a standstill for over two hours as the residents gathered around the grave where the three stood. They gave conditions that their kin must be taken back to the morgue or buried together with them.

After order was restored the deceased was hurriedly buried with the father leading in songs but wasn’t joined by the residents who disapproved the act. No prayers were conducted.

Dear Men, Your Woman Is Probably Cheating If She Shows These 5 Signs

A New Dawn For Maasai Boy Who Asked Atwoli For a Job. See What The Boy was Promised by Atwoli

Conditions in Kenya's Most Dangerous Prison

When To Call It A Quit, These Are Things You Should Not Ignore In Your Relationship