Barely a month ago, a suspected bank robber was shot and injured on as he attempted to rob Equity Bank, Nairobi West branch.

The knife-wielding man harmed a customer and a security guard during the 9am incident. 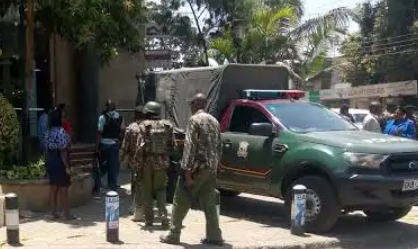 The man was shot and seriously wounded by police who were guarding the Equity Bank. He was shot inside the bank causing panic.

Police responded swiftly and took the man to the hospital in critical condition.

According to reports, the man allegedly died two days after the attack.

Before his death, he revealed to the police why he planned the robbery.

The man who was receiving treatment while under tight security said that he wanted money and that's why he stormed into the bank.

Many Kenyans gathered at the scene forcing the police to cordon off the area.

The robbery saw the bank temporarily shut down and the access road closed as onlookers had begun crowding up to catch a glimpse of the situation.