Mother in Agony After Her Son Was Kidnapped

By Maldiveswambui (self meida writer) | 1 months 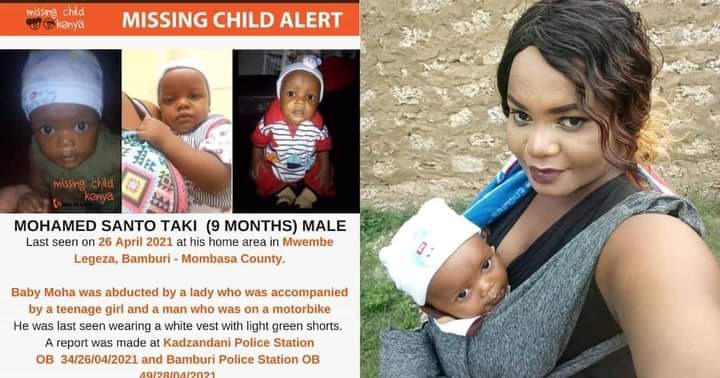 The woman arrived in Tina's house in the company of a teenage girl and they were not in a hurry to leave because they kept saying they were tired. The wig seller says the woman had told her she would take her time selecting a wig of her choice as she had spent that whole day looking for her.Tina said "I did not have a problem with her because in mind I just thought am selling another wig to her" The woman and daughter then stayed in Tina's house for about seven hours,the woman then told Tina that she wants to buy diapers for her nine months old baby known as Mohammed Taki.She sent the teenage girl to the shop to buy the diapers,and the girl requested to go with the baby, however few minutes later the baby was heard crying and the woman told Tina she would check why the baby was crying. Immediately the woman left is when Tina smelt a rat as she realized the woman had left with her handbag. "I rushed to the shop where the girl was to buy the diapers,I found neither the woman,her daughter nor my son. I then rushed back to the house to check if they had gone back,that when it dawned on me that my son has been kidnapped" Tina said.

A CCTV footage shows the woman and her daughter hopping on to a motorbike as soon as they left the house.The distraught mother reported the incident to Bamburi and Kadzandani police stations. The mother of one has since been sharing pictures of the kidnapper online as she got hold of her Facebook account,but as soon as the pictures of the kidnaper and her Facebook handle started circulating the Facebook account got deactivated raising more eyebrows.Tina still hopes to reunite with her son soon.

Content created and supplied by: Maldiveswambui (via Opera News )

Itumbi Writes a Message of Encouragement to Dr. Mukhisa Kitui After He Is Caught Up In A S£x Scandal

"Leaving Real Madrid Was My Fault, Not The Management's" - Sergio Ramos.

“You Are an Interesting Candidate, Not a Serious One…” DP Ruto's Response to Kituyi's Alleged Video

"Aliniacha Tu" How Did Your Ex Leave You? Here Are Some Excuses If You Hear Know It's 'Over'

Fired K24 TV And State House Photographer Finally Speaks, Thanks Ruto For Giving Him A Job