Police Beat Up, Injure Standard Media Group Journalist In the Line of Duty

By Jebinews (self media writer) | 5 months ago 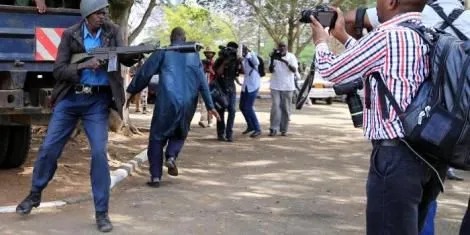 Eldoret-based Standard Media Group photographer, Peter Ochieng, is receiving treatment after he was allegedly roughed up and injured by police officers attached to Langas Police Station.

The veteran photographer sustained injuries and bruises on his neck and hands when police officers manhandled him while being escorted to the cells following an order by the station’s OCS.

Ochieng was apprehended for taking photographs of a police vehicle that was escorting persons nabbed peddling cannabis, with the OCS stating that such activities around the station were prohibited.

The photographer was in the company of a KTN’s cameraman, Simon Chepkwony, who managed to escape but had his equipment seized by the police.

According to Chepkwony, they had received information that a number of people had been captured by police for selling marijuana and that they had rushed to the station to gather more information.

When they finished setting up their equipment, the OCS ordered that they be apprehended immediately, claiming that taking photographs at the station was outlawed.

“We were doing our work as usual when the OCS ordered we get apprehended for taking photos at the station. I managed to escape from their grasp but they took my camera and my colleague was taken to the cells,” stated Chepkwony.

Uasin Gishu Journalists Association members swung to action after learning that their colleague was in police custody. They confronted the OCS who later released him.

However, attempts to have the confiscated cameras and other equipment returned to the owners bore no fruits with the association members camping outside the police station.

Chepkwony stated that they camped at the station to protest against the infringement of their freedom by the officers.

“We have managed to have Ochieng get treatment and fill a P3 form before recording a statement. The police actions were not warranted at all and we will do all it takes to ensure press freedom is guaranteed," stated one of the journalists at the station.

Cases of journalists being attacked or apprehended by the law enforcement officers while in line of duty have been on the rise with the Media Council of Kenya warning that such moves were detrimental to media freedom. 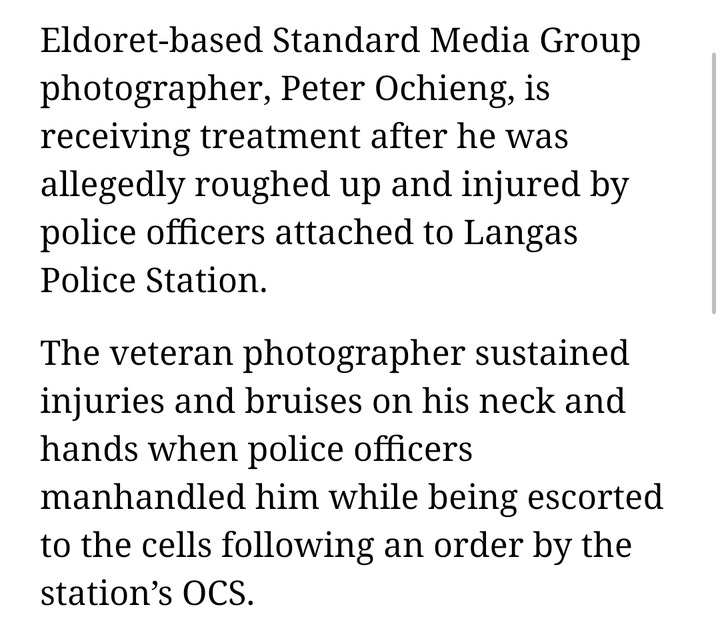