Funny but Strict, Times George Natembeya Has Been on the Spot Over His Controversial Remarks

By Jackiejeropsing (self meida writer) | 16 days 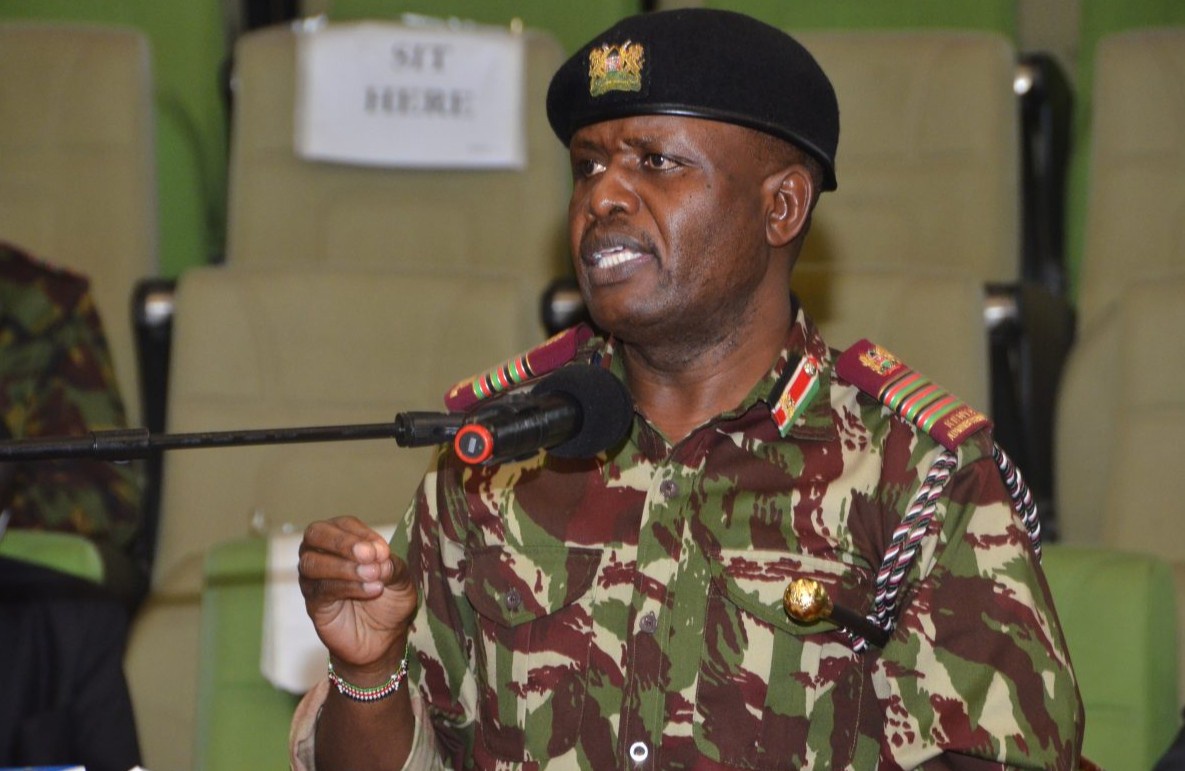 Rift Valley Regional Commissioner George Natembeya has been the head of news for the last 24 hours after he made controversial remarks concerning the bandits who have been terrorizing Laikipia.

So far, seven people have been reported dead and hundreds left homeless. As of yesterday, schools were closed including Merigwiti Primary School in Laikipia West which was torched by bandits.

Interior CS Fred Matiangi declared dusk till dawn curfew in the region in a bid to flash out the bandits while marking it a disturbed area.

While appearing for a TV interview Natembeya revealed that the bandits who were engaging police officers in gunfights were heavily armed with machine guns that were sophisticated and only used in international wars. This, he added, made it impossible to contain the insecurity situation.

His remarks have caused chaos along social media streets as Kenyans wonder how bandits can be well equipped than police officers. The big question is whether Kenyans will keep on dying at the hands of bandits since the police cannot fight them.

Natembeya is always on the spot over controversial remarks he makes. 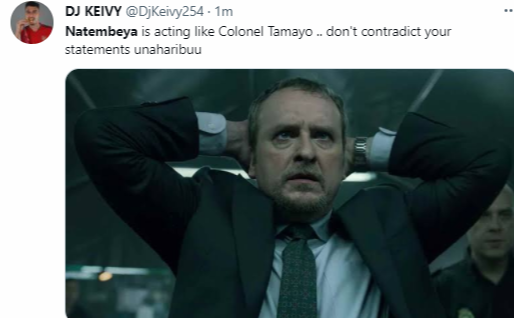 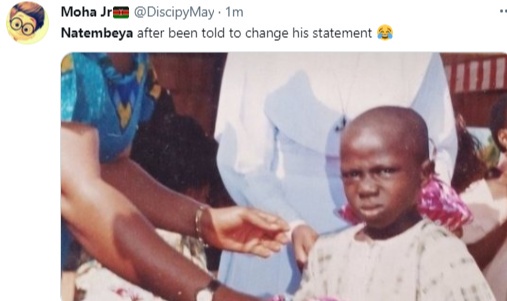 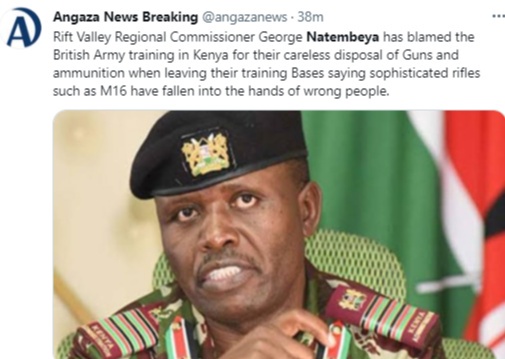 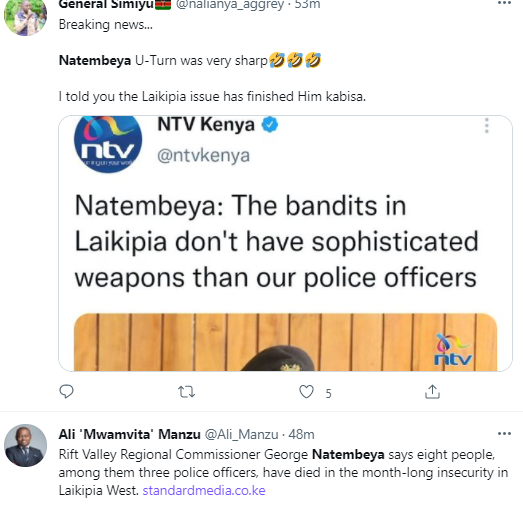 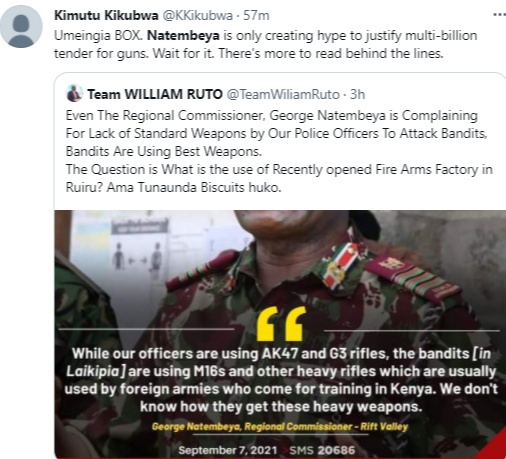 A few months ago, Natembeya indicated his intention to run for governor in his home county of Trans Nzoia.

“Currently, I am still serving in government but I am also listening to what people are saying. I will make a decision on that at the right time," Natembeya said.

In the past year, he has increased his activities in the county to assess the possibility of joining politics and evaluate his chances.

Later, he dismissed rumors that his development tour of government projects in Trans Nzoia was to popularize his ambition to become the Governor in 2022.

Natembeya who was speaking at Cheranganyi GTI, after touring projects in Kwanza and Cheranganyi Sub- counties said that he was leading a regional team of government officers to inspect development projects in the region.

“The regional team is visiting the 14 counties across Rift valley to identify challenges facing several contractors and finding solutions for the projects to be completed,” Natembeya explained.

“A few of projects that are yet to be completed have been affected by the Covid-19 challenges as businesses stalled affecting collection of revenue and thereby denying the government funds to continue with the already started projects,” he said. 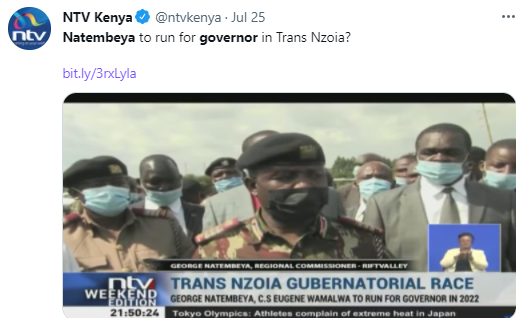 In another controversial stunt of dealing with the criminals, Natembeya gave Kerio Valley residents a one-week ultimatum to name bandits behind the fresh attack that led to the death of seven people and displacement of 200 others.

The administrator, who held a crisis security meeting with leaders and elders from Elgeyo Marakwet, West Pokot and Baringo counties at Tot trading centre, called for restraint as police pursue the bandits.

Natembeya wanted the community to expose the bandits, surrender the illegal arms and take their children to school in an array of measures he announced.

"It should not be business as usual when few criminals continue to harass and kill innocent people, reversing gains made by the prevailing peace in the past two years," said Mr Natembeya.

He said some professionals and politicians were fuelling banditry and cattle rustling.

"It is unfortunate that some politicians and professionals in some of these communities promote the retaliatory attacks as an act of heroism to gain fame. This must stop lest we arrest you and make you face the law," he said. 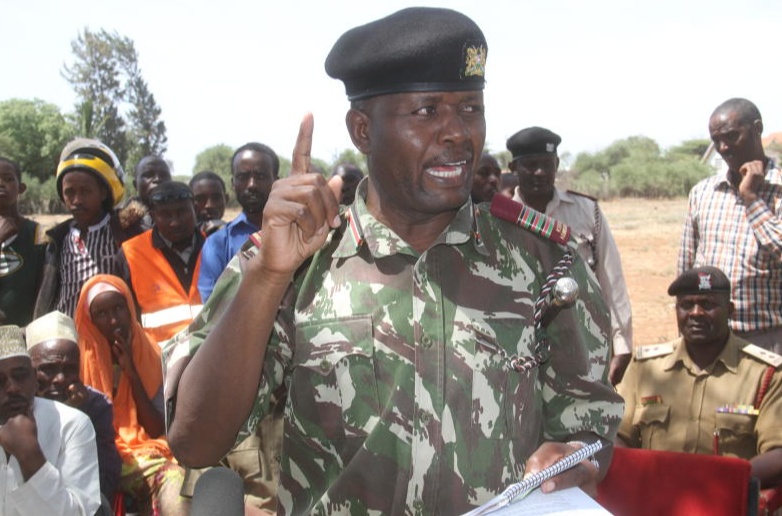 His choice of words and the ease with which he conveyed the message left his audience in stitches, with some wondering if he is the same no-nonsense administrator with a habit of taking politicians head-on.

“You have lost direction, fighting a war that you do not understand. Ogiek has been lied to that if they don’t give birth to many children they will soon be extinct,” he says in the video.

The occasion was a peace meeting, following ethnic clashes that had left six people dead, scores injured and dozens of homes torched, over issues to do with land. 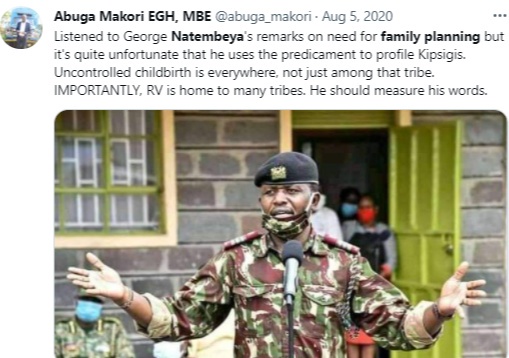 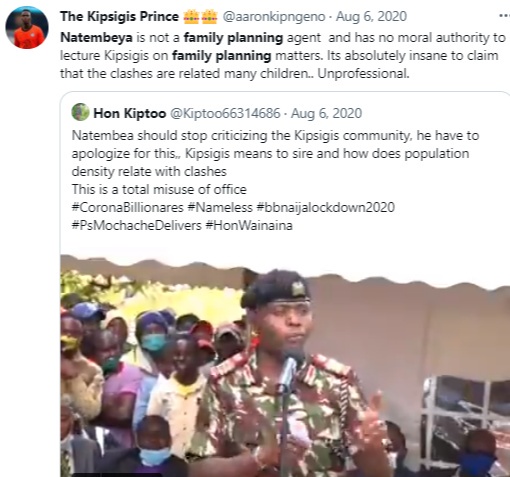 After the COVID-19 pandemic hit the country, Natembeya issued a satirical order to Chiefs under his administration, while addressing issues pertaining to teenage pregnancies.

In a video the police boss, while addressing a congregation in Rift Valley, asked Chiefs to ensure that the rate of teenage pregnancy was reduced.

However, the vocal commissioner directed that a Chief would take responsibility for a young girl's pregnancy as they have the mandate to enforce the law in their areas.

"If a girl in your area conceives, I will perceive it as your pregnancy until that day when she will give birth and a DNA test is conducted.

"But before that, you will take care of all her costs, from clinics to the maternity. Where were you when she conceived? Therefore, arrest everyone who puts our young girls in danger," Natembeya stated as the gathering broke into laughter.

The police boss has always raised concerns on the need to protect teenage girls and to ensure that they do not drop out of school.

"We have the highest rates of teen pregnancies in the country, and Female Genital Mutilation is widespread in some communities in Narok, but it is difficult to detect these cases as it is all underground and secretive," he stated.

"The tests will help us to better support girls who often have to hide their pregnancies and health complications after undergoing FGM."

Natembeya does not mince his words, something that has earned him both friends and foes in equal measures.

There are those who do not hesitate to turn up the volume of their television sets or radios whenever he is on air, just to catch up with his latest antics and satirical comments generally about life and his work. 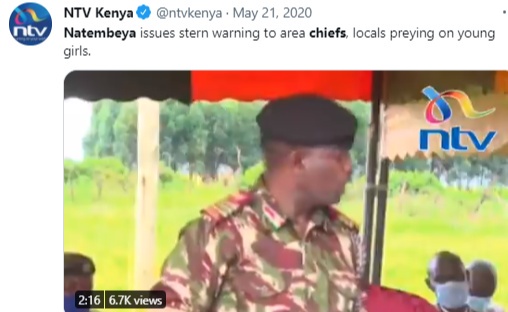 Creative And Decent Hair Styles For Ladies To Rock