By @newskali (self media writer) | 4 months ago 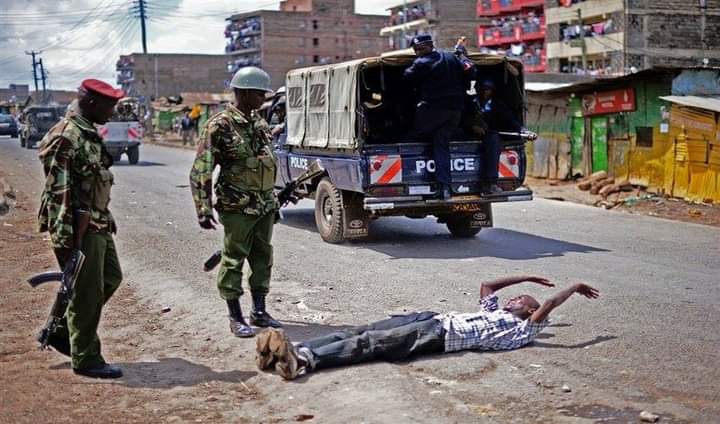 Three men are admitted at a Kiambu hospital in critical condition, after they were attacked by an irate mob last night in Kinoo, Kiambu County.

Topla Muteti, Kelvin Kamau and Erick Karanja all aged between 21 and 22 escaped death by a whisker, after police officers saved them from the wrath of angry boda boda riders and members of the public.

The three had robbed a woman who was walking home of her valuables, before she raised alarm attracting the attention of boda boda riders who were waiting to ferry late night customers to their homes.

Immediately after the attack, the trio immediately took flight aboard a red motorbike, prompting the boda boda riders to give chase at full light, baying for their blood.

In a scene reminiscent of the Grand Prix Motorcycle Championship, the roaring sound of speeding motorbikes rent the air, as over 30 motorbikes went after the thugs in the characteristic sleepy, Kinoo township.

As the thugs approached stage 87, the ‘nduthi’ men closed in on them at breakneck speed, with the engines of their spirited bikes rumbling fiercely following the onslaught.

Cornered, one of the thugs jumped from the getaway bike in a bid to escape but landed on the tarmac with a thud.

Meanwhile, the ill fated bike wobbled for a few metres and landed in a ditch, leaving the miscreants at the mercy of the irate motorbike riders.

What followed was a beating the thugs had never experienced in their lives, as the boda boda riders descended on them with blows and kicks accusing them of soiling their good name by using motorbikes as their gateway means after committing crime.

Police officers from Kinoo Police station responded to the commotion and saved the lives of the three, who were found in possession of a home made firearm capable of firing.

The thugs are currently fighting for their lives at a hospital in Wangige, Kiambu county. Meanwhile, the motorbike used by the thugs registration number KMFH 382L, remains in police custody as detectives launch investigations into the crime.