By Kentheblogger (self meida writer) | 19 days 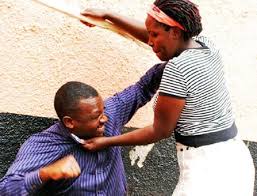 [Photo from a previous incident]

Taifa Leo,Kenyan Newspaper written in Swahili language,shared an interesting story of a woman from Kieni sub-county, Meru County,who reported her husband to the mother in -law for failing to be a responsible father.

According to the newspaper,the woman reported to her mother in-law, that her son had refused to give her money to buy clothing and food for the family,but instead participated in excessive consumption of alcohol with friends in the village.

The mother in-law responded by asking her daughter in law to stay calm,as she was going to purnish her son for being irresponsible father.

As usual the son came home drunk,but this day he found her mother waiting for him which was not a norm.The furious mother landed on the son with beatings that sent her to the ground,she went ahead to flog him until he asked for forgiveness and apologized promising that he was going to change. 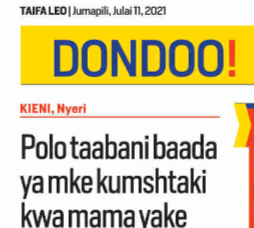 Content created and supplied by: Kentheblogger (via Opera News )

"Sharp Are The Arrows Of A Hurting Heart," Kikuyu Secular Artist Dj Fatxo Thrown Into Mourning.

Kericho Woman Strangles Husband to Death, Calls Friend to Confirm if He is Dead [VIDEO]

CAS makes a surprise visit to Wife's morning show, Wife writes him this