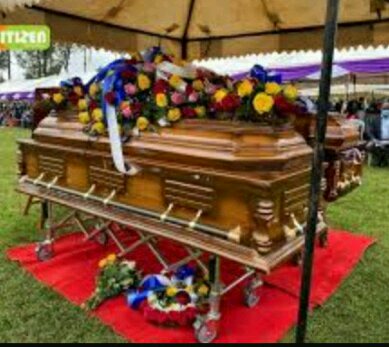 Abubakar Muli Nduva,has been buried today at his father's land in Tala Machakos county.In an emotional Requiem mass speeches,the mourners have praised Muli as a man of people.Who didn't like disputes and that his demise shocked them a lot.Thus,they called upon the DCI and IPOA to do thorough their investigation. Muli Nduva's body was found lying in City mortuary days after he was arrested by Tala police officers.Whereby,postmortem reports indicated that he died due to injuries he got on his private parts and on the head.Contrary to what the suspected police officers claimed that he died after consuming acid to avoid arrest.

According to Matungulu police boss,Ann Kimani,the late is reported to have threatened to kill his girlfriend, who in return reported the case to the Tala police officers .

This case has drawn attention from many amongst them,Stephen Mutinda Mule,the Matungulu Mp,who has tabled a motion in Parliament,demanding for answers from the security committee concerning the death of Muli Nduva on the hands of the police.