By Annnjeri (self media writer) | 9 months ago

Eleven people survived death by a whisker after a government ambulance rammed into a Matatu ferrying passengers along the Embu-Nairobi highway with the victims sustaining injuries from the aftermath.

Gichugu sub-county police commander Anthony Mbogo confirmed that the ambulance was carrying a patient who was a middle-aged woman who escaped from the accident unscathed with nine passengers in the Matatu and two people in the ambulance the one's who got injured. 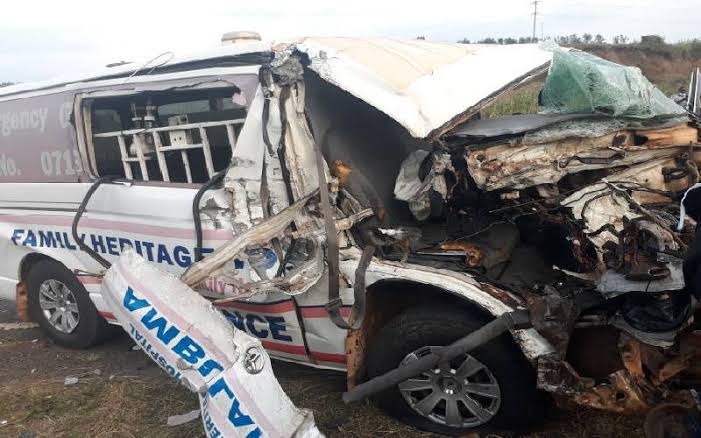 "I called my officers to the scene shortly after the accident where 11 people were taken to Embu hospital. The patient who was a middle-aged woman was not injured, officers made sure everything was safe,” stated the Sub-county Commander.

It is believed that the Ambulance which is owned by the Kirinyaga county was taking the patient to Kerugoya Hospital from Embu and had a damaged bonnet which could have led to the unfortunate happening.

Patients who sustained serious injuries were taken to Embu Hospital for treatment with concerns being raised over the spike in the number of road accidents being witnessed in the country.

Woman, Do These Six Things Immediately After Giving Birth

Reasons why you should take your bath salt

How Do I Cope When I Miss My Girlfriend

Jehovah Rapha, Which Means “The Lord Your healer.” Today's Word That Will Change Your Life Forever.

She Tried to Force Me To Main Room; Heartbreaking as Lady Narrates What Saudi Arabia Boss Did to Her

If you have this blood group, You are fortunate and important to society