Police officers from Zimmerman in Roysambu have arrested a man who is reported to have been Busted Defiling a 2 year old girl at a church event.

In a news report that has been shared by a reliable source of information, it has been revealed that the suspect who has been identified as Erastus Kariuki was allegedly arrested by police officers who allegedly saved him after he was caught by angry residents who almost beat him to death.

According to the reports given by the police, it has been revealed that the suspect was allegedly caught by Angry residents who beat him up before they Rescued him before they could kill him as they had threatened to.

After Being presented in court, the man who confessed his crime claimed that a demon got over him after he stepped out of the church adding that he didn't know what he was doing until he was caught by the angry residents who wanted to kill him after catching him in the act.

"As i was going to the toilet to relieve myself, a demon got over me and i felt like i had an extreme urge to sleep with a woman. This became worse after i away saw the girl. I followed her after which I did it. I came to my senses when I was caught by church members who almost killed me", he said.

While reacting to this incident, kenyans who took to their different social media accounts to express their opinions and suggestions on the matter have called upon the police to conduct a mental assessment test on the suspect in order to find out whether or not he is sane. 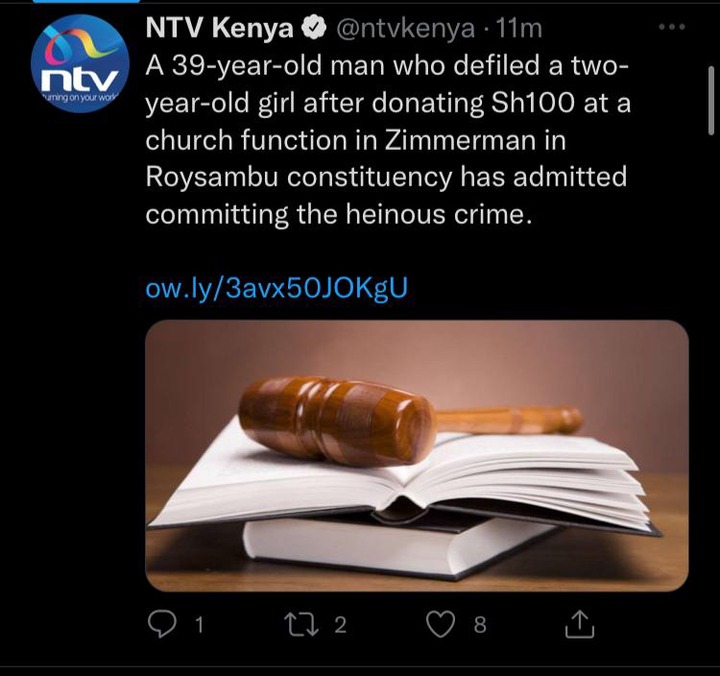 PHOTOS; Azimio Leader Already Seated At Bomas As They Wait For The Final Announcement From Chebukati