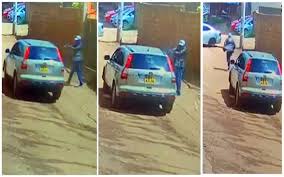 Kenyans are still yet to come to terms with an incident that took place on a broad daylight where a middle aged man was gunned down at Mirema Springs, Kasarani, Nairobi County.

Moses Njoroge Muiruri was shot at six times after he had dropped a woman and her child at Mirema, by a man who walked straight at his car after it was blocked by another and rained bullets at him before fleeing.

Police investigating the incident said that the father of three was found in possession of nine Identification Cards of different people, four mobile phones, a laptop and huge amount of money in different currency.

As Citizen TV was following up on the incident, they reportedly said that they managed to get information from one of victims whose identity card was found among the ID's had made a statement at Kasarani police station. 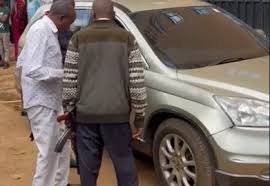 According to the statement, the man revealed to the police that his ID Card got lost after he was Drugged by a woman while having a good time at Nairobi club.

The man further revealed that the woman managed to steal from him around 200 thousand Kenyan shillings during the incident.

Kasarani OCPD Peter Mwanzo confirming the incident said that they had commenced manhunt for the killers.

Mr. Mwanzo said that they were investigating to established what could have transpered and are suspecting that it Might been a deal gone sour.