Police officers from South B have arrested a police constable over an incident that happened today in the morning after he allegedly shot one of his colleagues after an argument over unknown issues.

According to the reports given by a reliable source of information, it has been revealed that the rogue Police officer who has been identified as Sergeant John Nthenge, an officer who works with the DCIs allegedly attacked and shot at police constable Absalom Okoth for unknown reasons.

Reports given by one of the officers who was at the crime scene has revealed that he heard a couple of gun shots that were fired within the police station after which he rushed to the crime scene where he found the victim lying in a pool of blood.

They later rushed the victim to the nearest hospital where he is currently receiving medical treatment. A few hours later, the rogue police officer was arrested after he allegedly called his colleagues who went and nabbed him where he was hiding in his house after which he was taken to custody.

This is happening at the same time when the National Police Service through the inspector General of police, Hillary Mutyambai has revealed that they have launched a new project that is meant to help police officers deal with depression and other mental health related issues that has been blamed on the increasing cases of murder and suicide among other crimes committed by police officers.

In the past few months, a number of police officers have lost their lives in murder and suicide related cases while others have gotten themselves arrested after committing several crimes. According to the reports given by different nonprofit organizations related to mental health issues, they have called upon the government to declare mental health a national priority. 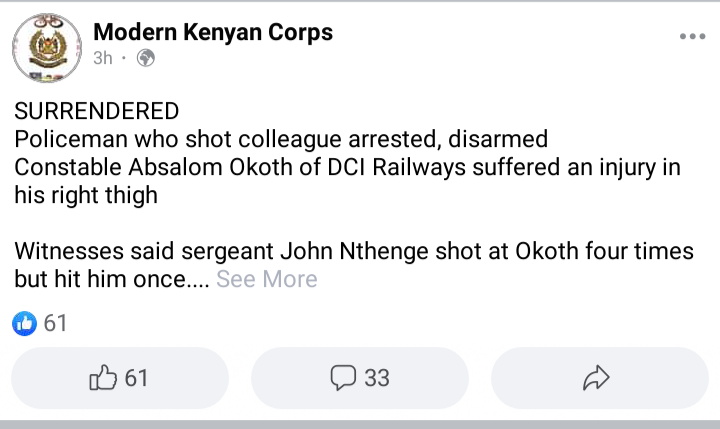 “It Is Fake" ODM Distances Itself From Shs.1 Million Per Plate Raila's Dinner Poster After Uproar