By Summary (self media writer) | 4 months ago

As burial arrangements are on course for the killer cop Caroline Kangongo, a senior police officer has delivered sad news.

According to na officer who spoke to Nation, the killer Cop will not get police honours during her internment.

According to the officers, security officers who killed themselves and committing suicide are not given police honours during their burial.

Caroline Kangongo is scheduled for burial on Thursday at their home in Nyawa Village Elgeyo Marakwet County. 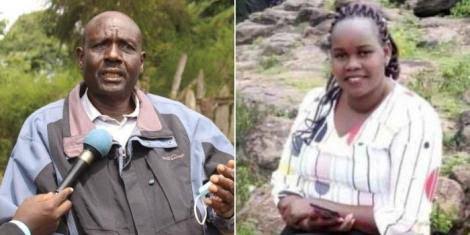 The burial was scheduled for Saturday last week but it was postponed due to the absence of a pathologist who was to conduct the autopsy.

The father to Caroline identified as Mzee Barnabas Kibor protested the postponement saying all burial arrangements had been concluded back at his home.

His cry led to the scheduling of the autopsy on Tuesday this week where Government Pathologist Johansen Oduor conducted the exercises at Moi Teaching and Referral Hospital in Eldoret. The body of Caroline Kagongo had been moved from Iten County Morgue to the Eldoret hospital for examination.

Kangogo is being laid to read days after the two men she killed including Fellow cop John Ogweno and Peter Ndwiga we're laid to rest.

She is said to have killed Ndwiga for having allegedly conned her at least Ksh1 million in a car dealership.

On Ogweno, she did not reveal why she killed her but she said they were in a romantic affair and she truly loved her.

Kangogo leaves behind two children and she is said to have separated from her husband before her killing spree.