DCI Detectives based in Bomet have finally apprehended a Man who is believed to have used a Knife to take away the life of His Neighbor, and Customer at His shop for allegedly owing Him. sh. 400 that was unpaid upto the time of His demise.

The Culprit identified as Evans Mutai who is the owner of a Shop in Sebaiyan, was nabbed yesterday night after He decided to kill His friend Faestus Keter who was left outside there bleeding to death as the suspect returned to His shop to continue With His normal Business, without any concern on His Heinous act. 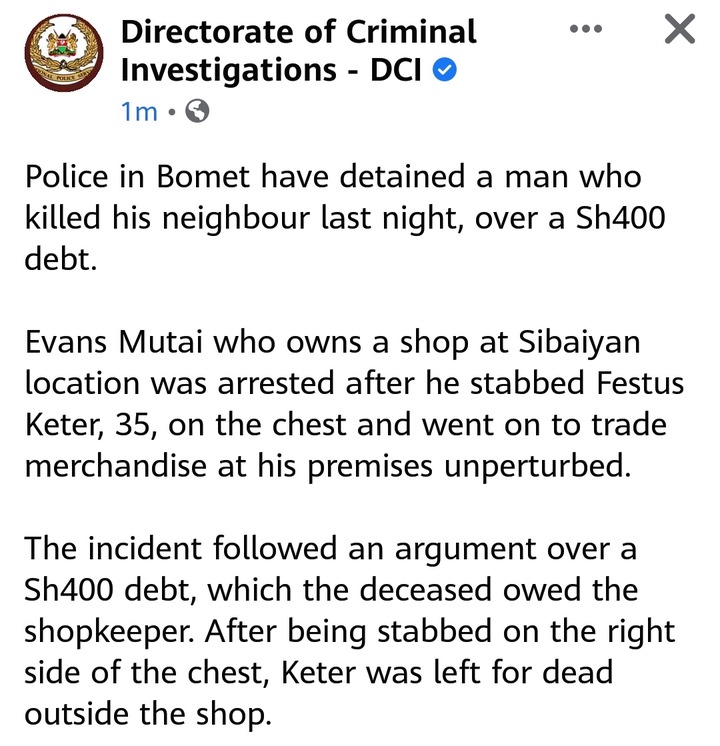 The Whole drama ensued However after a Fellow Villager who was on His normal routines bumped into the lifeless Body and immediately ranged the Officers who were based in Chesoen Police Station that is located approximately 10 Kilometers from the Crime Scene. After a series of Forensic analysis on the Dead, Mutai was finally arrested and detained as Investigations on the whole incident continues.

Among the evidence that was found on the ground was a Knife that had blood stains. Mutai will be araigned in Court to answer the Crimes on Monday. Meanwhile, the body of the dead has been taken to Longisa Hospital Mogue, where a full Postmortem will be conducted to ascertain the degree of the Murder and other tests. 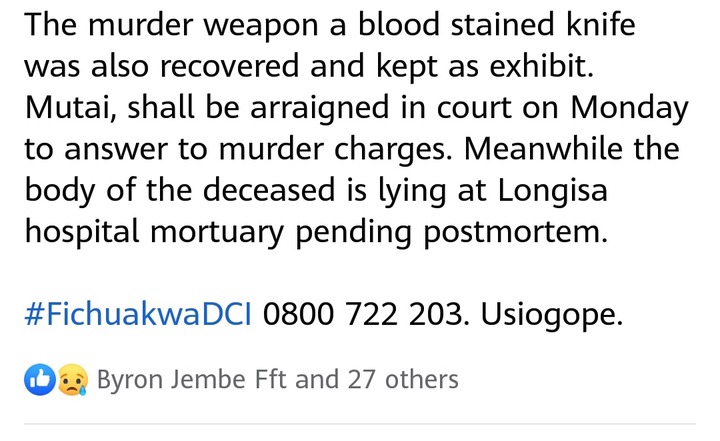 This Marks the second occurrence of the acts in the region within a Month , despite the relentless efforts by the Officers to restore Law and order. Three weeks ago, a Man was also killed after a brawl in an Alcohol drinking Joint, after one Man Ekai accused His friend of allegedly plotting His sacking in His place of work.

The government has also been urging the members of The public to solve their differences in a good way, and seek advise and assistance in case they are having a metal issues.