A University Comrade has allegedly been found dead in one of the apartments in Runda Estate after she is reported to have committed suicide under unclear circumstances.

Taking to his Twitter account to confirm the incident, a man who has been identified as Festus said that the body of the deceased has been found in her apartment today in the evening in what has been termed as death through suicide after she was found hanging in her bathroom.

Due to this reason, the witness who expressed his worries and concerns has called upon kenyans to make sure they share this news in order to reach out to her family and friends who might not know about this incident yet.

This is happening at the same time when the government has revealed that the rate of suicide and murder all of which are related to relationships and mental health problems have increased on an alarming level.

For this reason, a number of nonprofit organizations related to mental health problems have called upon the government urging them to declare mental health care a national priority in order to reduce cases of what they termed as unnecessary deaths in Kenya.

However, according to the reports given by most Kenyans who reacted to the incident, they claimed that the government also needed to create more job opportunities in order to deal with this issue. Giving their opinions, kenyans claimed that most Youths are dying due to stress caused by lack of employment. 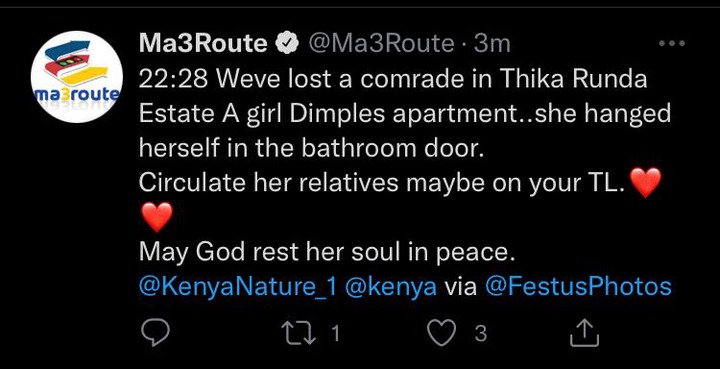