Police Move in as Dutch Tycoon is Murdered in Cold Blood, Girlfriend Found Tied Up Close By

By Kenyanewszjunky (self media writer) | 5 months ago 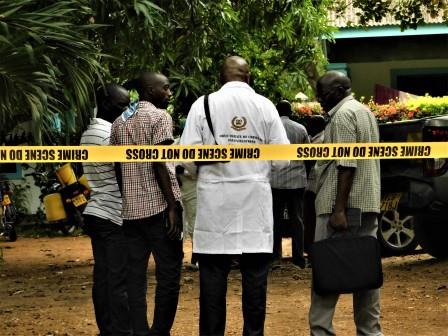 Police are investigating the shocking murder of Herman Rouwenhorst a Dutch National and his watchman who were found murdered in their Mombasa’s Shanzu Home.

At the same town, police in the area found Herman’s girlfriend Riziki Cherono, was found strapped in her car seat and calling for help near the Serena Beach Hotel.

Reports from the Bamburi police station under the OB number 6/4/6/2021, however indicate that Riziki had been driven from her apartment to the place she was found.

The officers who rescued her then accompanied her to her house where they found the lifeless body of Rouwenhorst lying on their bed.

The deceased’s hands and legs had also been tied and his mouth gagged as reported by the Daily Nation.

The two bodies were thereafter taken by the officers to the Pandya Hospital Mortuary awaiting a postmortem to establish the cause of their deaths.

Police have since launched investigations amid promises of bringing the perpetrators of the heinous crime to book.

The incident adds to the tally of the recent wave of killings around the Coastal are appearing to be targeting the whites.

Barely a week ago a German National and his girlfriend were found dead in Mtwapa, at different places in what was earlier thought to be the act of the girlfriend.

Further analysis led the detectives to a woman they believed was behind the two murders amid reports that the man had been thrown from the fifth floor.