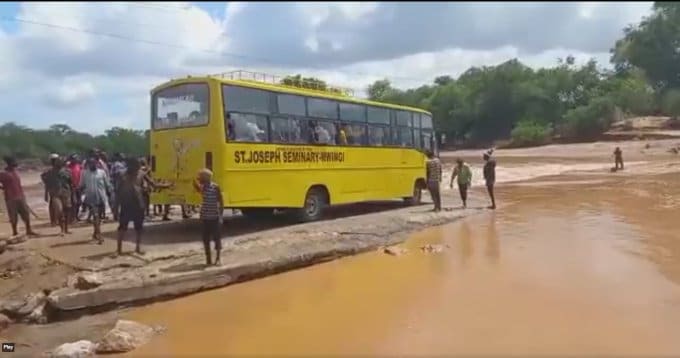 At least 23 people have been confirmed dead after a bus they were traveling in plunged into the Enziu River on Saturday in the eastern Mwingi region of Kitui County.

An operation led by the Kenya Defense Forces (KDF) saw other bodies recovered on Saturday evening before the operation was put on hold until Sunday morning.

The 51-seat bus belonging to Mwingi Junior Seminary, a private school run by the Catholic Church, transported choir members to the Nuu region from Mwingi town to attend a wedding ceremony.

Mwingi East Sub-County Police Commander Joseph Yakan said the accident was caused by too high tides, dragging the bus into the river despite the driver's attempts to control the vehicle.

In videos circulating on social media, the bus was captured shortly before plunging into the river with passengers crying for help.

A school bus was washed away while crossing the Enziu River in the Nuu neighborhood of Mwingi, Kitui County. Rescue operations in progress. pic.twitter.com/z9wUonvVHA

Reports say 15 of those dead belong to families whose 70-year-old parents were due to celebrate their wedding.

Among the dead, police said, was the daughter of the groom identified as Jane Mutua and three children.

The ill-fated bus was carrying 68 people at the time of the crash.

Twelve people survived the incident. The survivors were rushed to Mwingi Level Four Hospital for emergency treatment. In total, 35 people have not yet been identified.

As condolences continue to flow, it emerged that the driver of the vehicle was under pressure from passengers to cross the swollen river after finding they were late.

"We established that some passengers were pressuring the bus driver to cross the swollen river, but he insisted that he did not know about the Enziu river bridge," Justus Musyoka said, a leader of the Catholic parish of Mwingi.

Loss for Business Owners In Makutano After Flames Destroy Businesses