A 24-yer-old lady by the name Violet Mukhwana has recalled how her husband became violent a year ago and brutally attacked her using a panga until she passed out. 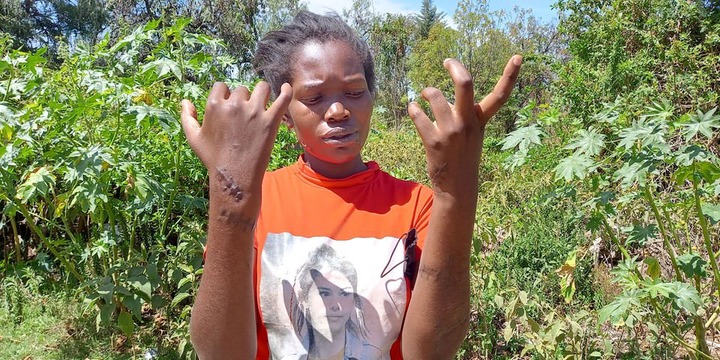 According to Nation, the enraged husband attacked her moments after she arrived to their home in Naivasha, she suffered deep cuts in the hands, legs, cheeks and nape. She was then hospitalized for more than two months.

While recalling what happened on the fateful day, the mother of two said that she had just returned from her place of origin, Navakholo Village in Kakamega County. She had gone there to pick her children's birth certificate and stayed for a fortnight. The husband summoned her and she went back.

After arriving in Naivasha, she was picked on a motorcycle at the bus terminus by the husband and taken to their home in Karagita. She said while at home, she went straight to the kitchen to prepare tea before embarking on supper preparation.

Before she could finish, the husband summoned her to the kitchen. Although she noticed nothing was amiss, she got shocked when the husband gave her a phone and told her to call one of her brothers to tell him that they should come pick her body. She stood shocked and couldn't utter a word as the husband issued threats.

Suddenly, he drew a panga and began attacking every part of her body until she passed out. Even their seven-year-old child was not spared by the enraged husband.

He then surrendered to the police and told them that he had killed his wife and her body is lying in the house. She was rescued by neighbors and after two months of being hospitalized, she was later taken to a rescue center. On Tuesday, the woman shocked Naivasha Police Station Officers after saying she had forgiven her husband and want him out of prison to help her take care of their children.

The man on December was handed a life sentence after being found guilty of the attack. The woman says she is expecting their third baby and want him out because life has been unbearable. She has also not fully recovered and wants well-wishers to assist her since she cannot undertake any job.

Remember Her in Prayers, Mr Seed Says as He Finally Reveals His Wife's Current Health Condition

Georgina Njenga Opens Up on Her Unexpected Labour as She Reveals That She Gave Birth at 33 Weeks.