By Soccer,AthletesNews.com (self media writer) | 19 days ago 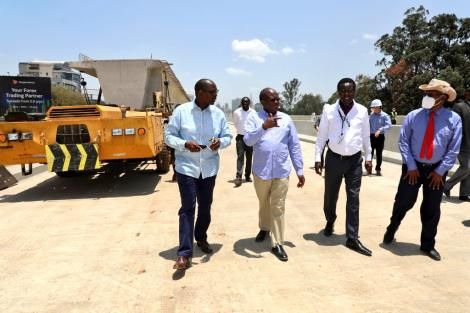 Government officials led by Transport Cabinet Secretary, James Macharia, on September 29, 2021, did a test drive of the Nairobi Expressway ahead of its launch in 2022.

In a video, the delegation was seen driving through the elevated section of expressway along Waiyaki way in Westlands, Nairobi

In a statement by the CS, Macharia stated the delegation was inspecting projects aimed at implementing President Uhuru Kenyatta's legacy projects.

"We inspected road projects that will decongest the Nairobi Metropolitan Area and facilitate seamless movement on the Northern Corridor," read the statement.

The CS further stated that the Nairobi Expressway would be completed in six months before its official launch by Uhuru.

"We also inspected the Nairobi Expressway which is 64% complete and expected to be completed in early 2022," Macharia stated.

The Transport CS added that upon the completion of the project, the cost of using the expressway would be affordable to all Kenyans.

“It will be affordable for Kenyans to use, and that is the most important thing. The toll fee will range between Ksh 100 and Ksh 1500 depending on where you enter and the size of the vehicle,” he added.

Macharia and his team also inspected the progress of other road projects being undertaken by the government, stating that the move was to ensure that the projects are completed on time.

"Reviewing expansion of the James Gichuru Jnct – Rironi highway into a 6-lane dual carriageway, the main carriageway of which is 97% complete," he stated.

He added that his Ministry had plans to engage with the private sector in undertaking the the largest project in Africa.

"We also plan to implement the Rironi-Nakuru-Mau Summit Road expansion project, which will be the largest Public-Private Partnership (PPP) road project in Africa," Macharia stated.

List Of Roads To Be Closed During Mashujaa Day