By Wabende (self media writer) | 21 days ago 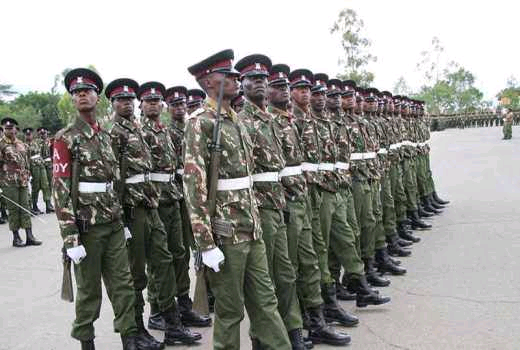 Members of Administration police during a past march past.Photo courtesy of Internet.

According to a police report seen by this opera news writer,it stated that Raymond Masheti a Luyha male adult and a businessman at Lusui market within Iguhu location that on 03/10/2021 at 12:37hr while in his Mpesa shop one male adult unknown to him came into the said shop and requested a deposit of Kshs 5, 000/- in his number 0726724767.

The same was in Administration Police Service combat uniform and had introduced himself as an inspector of police in charge Iguhu police post. After confirmation of deposit, he failed to hand over the cash to the reportee with an excuse that he will bring the same at 6pm.

The police report seen further states that the reportee later tried the number but had been switched off. Today the said suspect while in civilian clothes came again and requested further deposit Kshs 2800/- but the reportee alerted the police.

The Boda Boda riders intercepted him.The police were called and found him to have changed into uniform. It was established to be No. 254617 Administration Police Constable Zahnun Musa Ore who is attached to Critical Infrastructure Protection Unit(CIPU) Regional Command Western.

The police report seen by this writer disclosed that another complainant from Sigalagala market Elvis Odhiambo Juma noticed him while under custody of the Boda riders and reported that the same conned him Kshs 2800/- on 21/09/2021 while in same uniform and disappeared.

He has been placed in police cell pending further police investigation and has been taken over by Directorate of Criminal Investigation Kakamega South Sub-County.

He is likely to be charged for the offence of obtaining money by false pretense and impersonating a senior police officer.