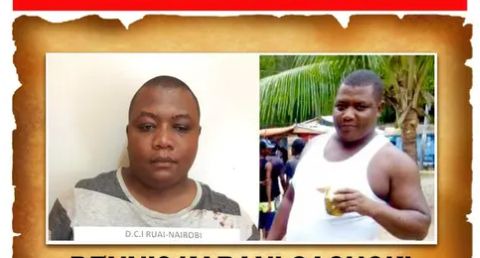 Dennis Karani, the man accused of killing rogue criminal Samuel Muvota who was shot in broad daylight has surrendered to the police.

Gachoki claimed that he did not commit and has only met Muvota twice in his life; one time in Meru and the other time in Nairobi.

He also revealed that he has a case in a Meru court after he was accused of acquiring money made through fraudulent ways.

Dennis had been accused by the DCI of being a partner in crime to Muvota. The DCI further claimed that Dennis and Muvota had fallen out after Muvota unfairly shared the proceeds of crime and the beautiful pishori ladies who would first pay with their flesh before being introduced into the business of stupefying men using drugs and later stealing their phones, money and identification documents.

Dennis was referred to by the DCI as an armed and dangerous man who stole a gun from a police officer in Mombasa in 2020. His last phone signal had been traced at burnt forest and the DCI suspected that he was fleeing to a neighbouring country.

Kenyans however poked holes after photos of him were shared, most of them stating that the man captured by CCTV shooting Muvota was slim and talk unlike Dennis Karani.

Is This Man Becoming Joho's Biggest Threat In Mombasa Politics?

Kenyans Surprised After A Truck Was At Mombasa Road Ferrying This