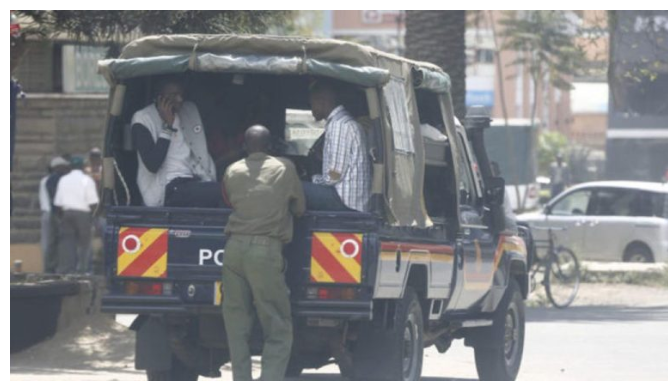 A police officer was on Wednesday arrested for robbing a Tuk Tuk driver ksh 1,100 in Kandara, Murang’a County.

The officer was arrested on Wednesday evening following a complaint that was filed by the victim at Kabati Police Station in Murang’a County.

According to the police report, the victim narrated how the officer flagged down his Piaggio Tuk Tuk, registration number KTWA 546X, and demanded Ksh 2000.

“When the driver failed to part with the money, the officer allegedly snatched Sh300 that the driver was holding,”

“He further went ahead and forced his hands into the complainant’s pockets and robbed him of a further Sh800, leaving his trousers torn apart,” DCI said.

DCI said that the raised alarm and the officers from the Kabati Police Station led by the OCS rushed to the scene of the incident.

“The officer was arrested and placed in custody. Investigations into the incident are ongoing with the aim of bringing justice to the Tuk Tuk driver and making the officer accountable for his actions if found culpable,” DCI said.

This comes a day after five police officers in Kiambu County were on Tuesday evening arrested following a robbery with violence complaints filed against them while enforcing corvid-19 curfew rules.

The man was handcuffed and one of the police took his phone, demanded his Mpesa pin number, transferred 1,030 to another subscriber and deleted the Mpesa message.

The matter was brought to the attention of the Kiambu County police commander Ali Nuno after it went viral on social media, he launched an investigation of the matter which took him to ask for data from the phone provider after he obtained a court order.