A photo of the Kenyatta Avenue signpost, which is supposed to be erected in the Nairobi Business District (CBD), made rounds on various social media platforms raising concern, especially about the safety of government infrastructure.

The Kenyatta Avenue signpost was captured on a table in an enclosed room with other household items igniting debate about how it was dismantled from the CBD.

The raging debate saw Kenyans share online other bizarre items in Kenyan homes, including bed sheets which are specially designed for hospitals and supermarket trolleys turned into kitchen utensils shelves.

A signpost belonging to the Philippines Embassy was shared online, appearing to be inside a room. Other cases that ignited debate in the country are university chairs inside students’ houses and waiting lounge seats used as furniture in different homes. 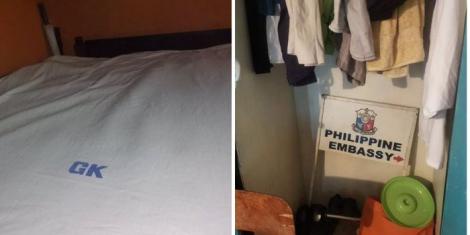 The rather unusual cases, especially that involving the Kenyatta Avenue signpost, raised concerns, with some Kenyans arguing that it was promoting vandalism.

According to reports, the vandals target guard rails, barrier grills and street light posts, compromising the safety of passengers, pedestrians and thousands of motorists.

Ksh8.5 billion Outering Road in Nairobi topped the list of the major highways targeted by vandals in the country, prompting the government to restrict scrap metal business in the country.

“We are watching our country being destroyed, and eventually, we’ll be the ones paying the price because the Government will have to repair the road for this by either increasing taxes or diverting funds from another project,” a resident of the Donholm area in Nairobi lamented.

“We have concerns where some people are building road furniture, including signposts. However we are thinking of other materials which can be used instead of metals which attract vandals,” a Kenya National Highways Authority (KeNHA) stated during an engineering conference on Wednesday, November 23.

The country suffered a nationwide power blackout in January after a high-voltage energy pylon fell. The outage was attributed to vandalism that targeted electricity transmitting materials.

Besides vandalism, a section of Kenyans insisted that the availability of government and privately owned items in homes promoted theft.

For instance, a supermarket trolley turned into a kitchen shelf raised questions, with some Kenyans arguing that it was promoting theft, especially if the owner acquired it using dubious ways.

Additionally, a section of Kenyans maintained that the presence of government properties in different homes, such as hospital bed sheets, was depriving other Kenyans access to quality services.

Following the spike in cases of vandalism and theft of public property, major stakeholders called on the government to institute reforms that would protect critical infrastructure in the country.