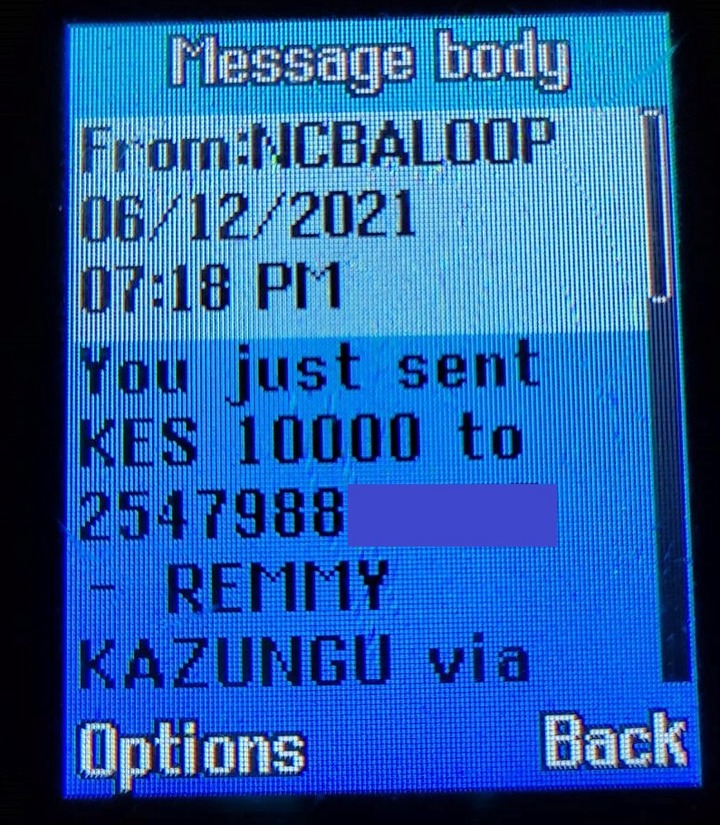 Screenshot of M-Pesa message to Remmy.

A lady has found herself in tricky situation after she received money from unknown person but before she could enjoy what she thought was Christmas windfall, the law is on her neck.

A guy identified as Kelvin Kamau made slight mistake when sending Sh10, 000 from her mobile app of NCBA, the money ended up in the Mpesa account of a lady by the name Remmy Kazungu.

He was in utter shock when he tried to reach Remmy unsuccessfully.

“By the time I was able to reach the NCBA customer care, the money had already been withdrawn” Kamau said. 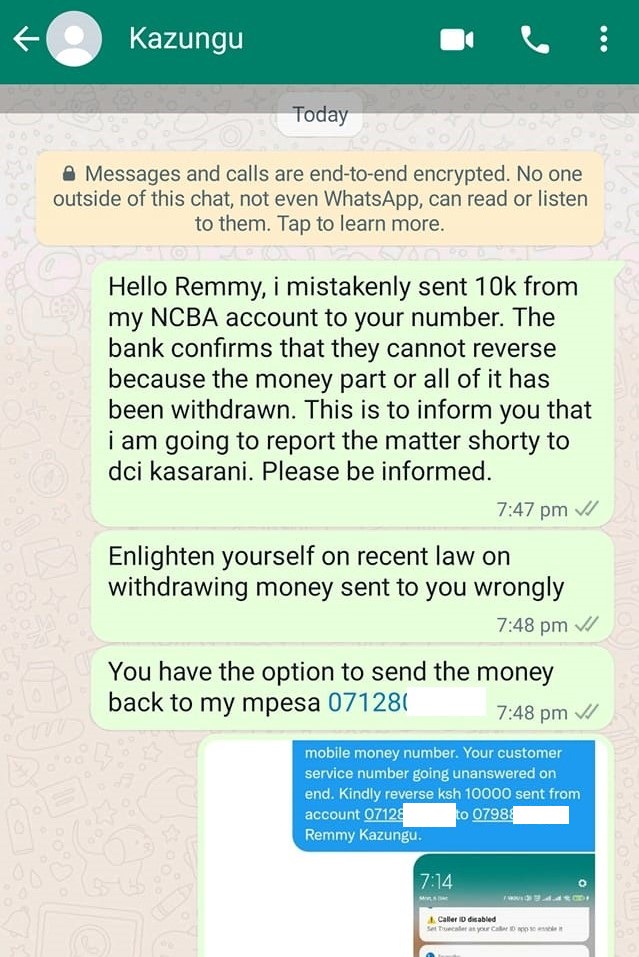 Kamau's message of appeal to Remmy.

He reported the matter to Mwiki Police Station, a move that has scared the receiver of the money.

Kamau sent her a text message urging; “Hey Remmy, I mistakenly sent 10K from NCBA account to your number. The bank confirms that they cannot reverse because the money part or all of it has been withdrawn. This is to inform you that I am going to report the matter shortly to DCI Kasarani. Please be informed”.

He added; “Enlighten yourself on recent law on withdrawing money sent to you wrongly”.

In her response to one of Kamau’s friends, Remmy defended herself saying she did not ask for it neither mugged or break into somebody’s house. 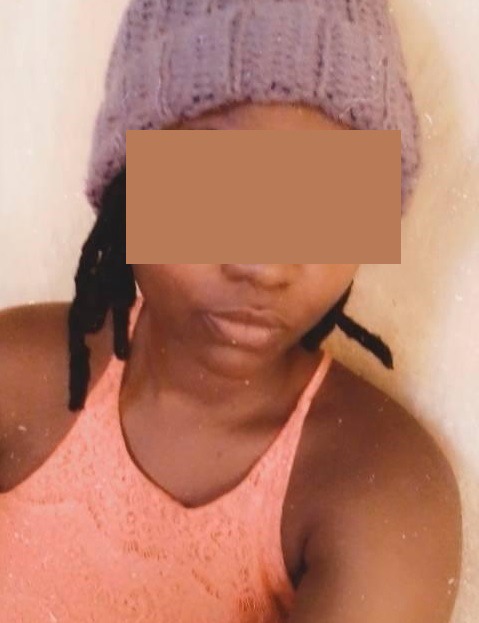 Blurred image of the lady.

“Mimi sikupiga mtu ngeta, siku break in kwa mtu ama anything. The money couldn’t be reversed from the bank ju fuliza ilikata yake. The rest of it ilikua tu. If I was bad enough ningepotea tu hivyo but I was there waiting mtu acall. When I came back, I found two missed calls and some threats. Threats enye zunanendelea sai na matusi of all sorts from his friends”.

She threatened to counter the police case with another.

“You can tell him that tomorrow I will be taking his money and screenshots za hizi matusi zote police station. Aikujie huko” she said.

However, when it turned hot for her, she started refunding the money and by this morning she had sent back Sh6, 720. 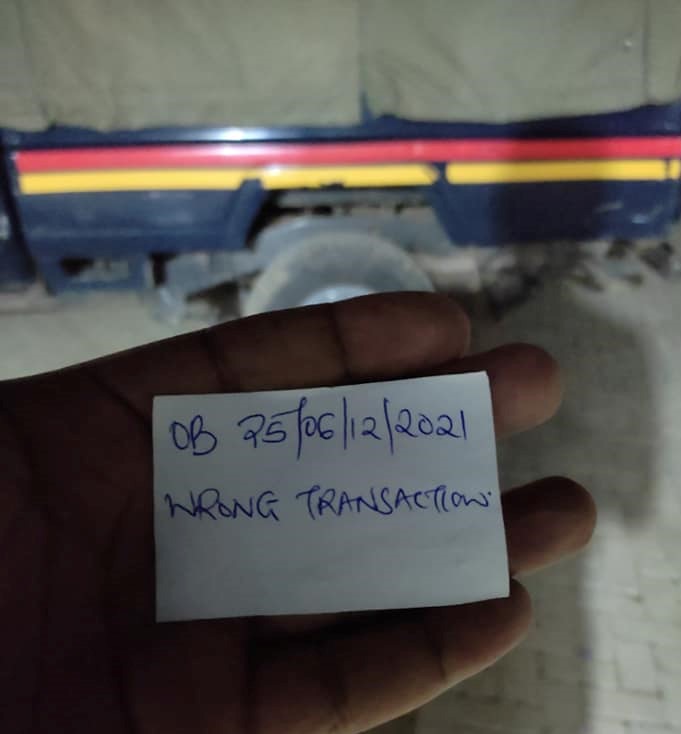 In Kenya Section 35 of the Computer Misuse and Cybercrimes Act says if you fail to reverse an M-Pesa payment sent to you by mistake, you can be jailed for two years, pay fine of Sh200, 000 or both.

Mid-this year Cyrus Maithya was sentenced to three months by a Nairobi court after he refused to return Sh16, 463 sent to him erroneously.

In another case a lady identified as Margaret Njeri was jailed for six months after she failed to reverse Sh27, 140 accidentally sent to her. 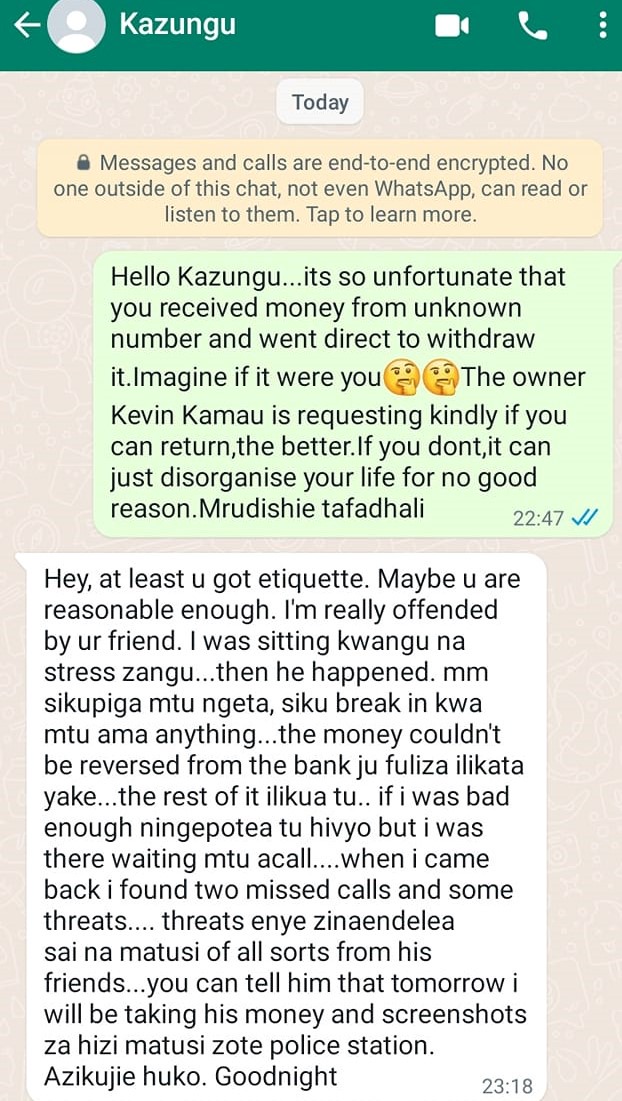 Remmy's reply to the accusation.