By jeropbett (self media writer) | 2 months ago 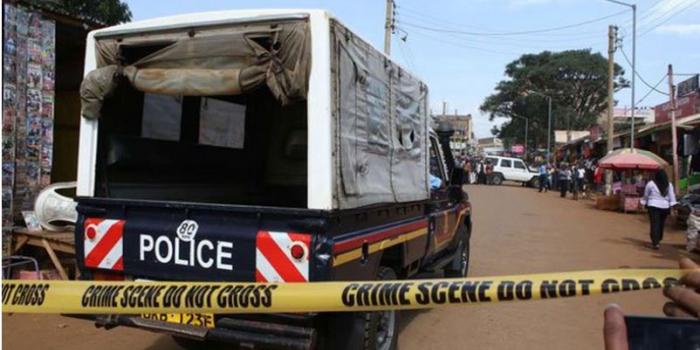 After a Nairobi businessman of Ethiopian ancestry, Samson Halakhe, was kidnapped and brought to an unknown destination by strange guys while in traffic on Friday, the prevalence of abductions in the country has risen to alarming levels.

According to the disturbing CCTV footage, a traffic cop on duty was seen assisting Samson' s kidnappers in getting him out of his car. He was then manhandled before being bundled into an awaiting car, which then sped away.

Since the incident on Friday, the victim' s family, lead by his wife, Milan, claimed that they have been unable to locate him, despite visiting nearly all police stations in the city in the hopes of finding him in one of the cells. 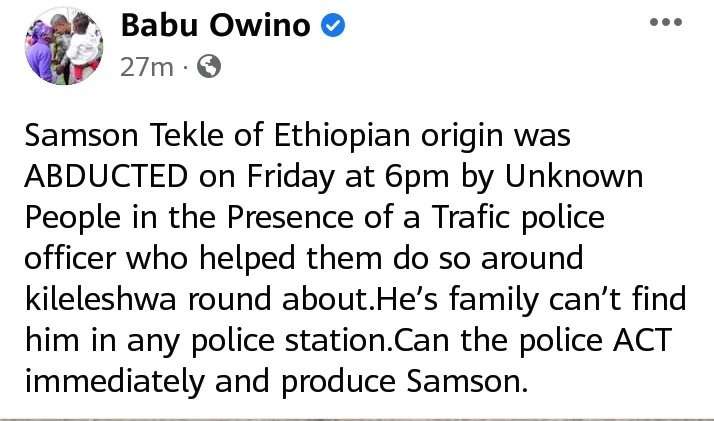 The distressed woman claims she has even given a statement to the police in Kilimani, but no action has been taken to assist her.

Milan has now begged with anyone who cares, whether citizens or government officials, to find out what happened to her spouse and potentially reunite them.

She went on to say that they are legitimately in the nation and conducting lawful business in the LPG gas industry, and that her husband has never been involved in any criminal activity or other shady dealings, thus nothing justifies his kidnapping.

Babu Owino, an Embakasi politician, used to social media today to voice his outrage after one of his close allies was kidnapped.

According to Babu Owino Samson, an Ethiopian national, he was ABDUCTED on Friday around 6 p. m. by Unknown People in the presence of a traffic cop who assisted them around the kileleshwa roundabout.

His family is unable to locate him in any police station, and fear is beginning to set in.

With many pointing fingers at the police, the Embakasi MP has urged the state to produce this businessman.

He asked, " Can the cops ACT IMMEDIATELY and produce Samson? "

Several armed guys were seen handling him as they loaded him into a waiting Subaru in a video posted by the MP.

This horrifying tragedy occurs at a time when a large number of young men have inexplicably departed for reasons unknown.

The majority of these people have been investigated by the government for terrorism- related offenses.

Fahyvanny Introduces Her Grandma to Fans and they are Wowed

WARNING TO MEN: Don't Treat Your Girlfriend Like A Wife You Will Cry, Thee Pluto Advices Dating Men