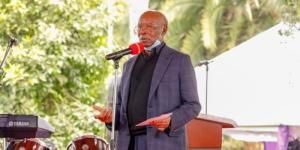 The crowd was agitated after Raila invited Nigerian Senator Obi Igbike, to address the crowd.

Macharia, through Raila, promised that he would establish a Borana radio channel in the area in less than three weeks. Its headquarters would, however, be in Nairobi like all other RMS owned stations.

“There’s an important man here called SK Macharia from the Royal Media Services. He has told me that this area does not have a local radio channel.

“Right now, he promises that you will have one in the next three weeks, and he will employ your children to be broadcasters in the channel,” Raila noted.

Prior to the billionaire's intervention, the youth had declined other local leaders' efforts to calm them down.

Raila had earlier on assured them that he had lots of friends from all over Africa who supported his agenda and would tour the country with him to address important issues which cut across the continent.

"People of Isiolo, I want you to be smart and listen to all leaders. I appeal to you that for the respect you have for baba, don't bash anyone," Raila pleaded but failed.

Suna East Member of Parliament, Hon. Junet Mohammed also came to his party leader's aid but was also heckled by the residents.

After calm was restored, Raila addressed the youth, stating that he had been informed of the locals' unhappiness at the Nigerian leader addressing them in English. He added that the youth preferred listening to a local and not the visiting international leaders.