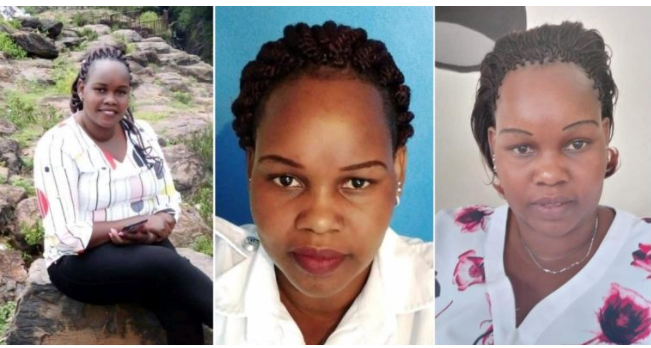 Khaminwa acknowledged that he had also heard of such reports alleging that Kangogo had listed conditions prior to turning herself into the authorities.

However, he declined to comment on whether the officer was in a position to list her choices and preferences, and negotiate for herself.

“I don’t know her personally. I have never met her. Maybe she is familiar with me and we may have interacted in the court’s precinct as I represented my clients.

“We (his law firm) offered to represent her in court and all she has to do is reach out to us,” Khaminwa stated.

Earlier on, Kangogo was reported to be in communication with rogue officers in the force, who had vowed to protect her and bungle the case. She is reportedly the cleaner and top assassin of the cartel accused of protecting business owners, politicians, drug lords, highway robbers, and carjackers.

Khaminwa filed a suit barring the state from arresting Kangogo when she surrenders.

So here is the chronology so far…

At 8.40 am on Monday, July 5, a police officer, Sergeant Joseph Ologe, who resides at the Kasarani police houses, reported to the Nakuru Police Station that around 7 am while he was reporting to work, he spotted PC Ogweno’s car, a Toyota Corolla (KBV 735U), with broken windows and the engine still running.

When the officer peeped through the broken driver’s window, he saw PC Ogweno lying in the car seat with blood oozing from his nose. Officers who responded to the report discovered that the officer had been shot and was dead

A 9mm caliber cartridge, a stone, and a metal rod are suspected to have been used to smash the window were found at the scene. On further investigation, the officers noted that PC Ogweno’s firearm was not on him though he still had the holster. Records at the station’s armory indicated that he had been issued with a Ceska pistol with serial number 94676 and so the detectives suspected that whoever had taken the officer’s life had made away with the gun.

Investigations into the killing of PC Ogweno was immediately taken over by the Nakuru East sub-county criminal investigations officers, who found near the scene of the crime the mobile phone of PC Ogweno’s colleague, Cpl Kangogo, suspected to be involved in an affir with PC Ogweno.

A ransack at Kangogo’s house, officers found PC Ogweno’s clothes house but Cpl Kangogo was nowhere to be seen.

On Tuesday, July 6, the Directorate of Criminal Investigations (DCI) declared Cpl Kangogo a person of interest and began a search for her. As they searched, the owner of Dedamax Kimbo hotel, Peter Kiumi Mugeshi, made a report through a call to the OCPP of Mugera Police Post that a man had been found dead in a hotel room.

It was established that the man’s identity was Peter Njiru Ndwiga, 32, and he had booked the room (No.107) at 4.22 pm on Monday in the company of a woman. In his pockets was a receipt for an Sh3,020 payment made to Jogoo Kimakia Country Lodge in Thika using a bank card belonging to Cpl Kangogo.

The receipt indicated that the payment was made at 15.29hrs on July 5. Lodge employees said Cpl Kangogo had eaten lunch at the facility on Monday, July 5.

The DCI issued a statement, declaring Cpl Kangogo “armed and lethal” and cautioning people, particularly men, to be wary of her as she was “on a killing spree and was luring men to hotels before murdering them”. The DCI issued a toll-free line, 0800722203, to the public and asked them to report any information concerning the whereabouts of Cpl Kangogo.

As the search for Cpl Kangogo entered Day 8 on Monday, July, 13, the Law Society of Kenya, through CEO Mercy Wambua, enlisted the services of veteran lawyer John Khaminwa to represent Cpl Kangogo in court and to bargain for her release on bond pending her arrest.

Sources said Cpl Kangogo had expressed fears for her life and therefore wished not to be detained in any police station. Senior Counsel Khaminwa, attaching conditions to the gesture, said Cpl Kangogo must surrender the weapons she is said to have to the police or to any of Khaminwa’s law firm offices.

23-Year-Old Man Reportedly Kills His Son, Dares To Kill His Wife If She Raised an Alarm Over The Issue

High school students suspended for getting an extra plate of food readmitted to school.

DCI Appeals for Information On This Criminal Fraudster's Whereabouts

Shame As Mulembe MPs Exposes What Raila, Azimio Were Trying To Do To Them That They Refused