Incidents of love triangles that have led to deaths of people have been very many in the country with the government urging people to resolve differences in different ways instead of resorting to violence.

Picture courtesy. The MCA and his girlfriend in court.

Yesterday, a Member of County Assembly from Kiambu County, was arrested alongside his girlfriend over the death of a man who they had beaten up.

The 45 year old Gerald Gachugu Gichuhi was killed on Tuesday this week in Juja, Kiambu County by the two accused.

Honorable Samuel Njenga, the member of Kiambu County Assembly representing Githobokoini ward in Gatundu North constituency is the main suspect together with his girlfriend identified as Julia Wambui.

According to the Daily Nation Newspaper this afternoon, it has been revealed that the man who was killed by the two is said to have been an ex boyfriend of the girlfriend of the Member of County Assembly.

The two, alongside five others, are accused of hitting Gichuhi with a blunt object on his head after which he was rushed to Thika Level 5 Hospital.

Gichuhi, is said to have been hit by a blunt object on his head by the accused at the MCAs home that is found in West View Estate found in Juja Constituency.

The three co-accused, Mr Stephen Macharia Njeri, Mr Alex Njihia Gathuri, and Ms Elizabeth Nyambura Macharia were all detained by the court pending an investigation into the death of Gichuhi.

The court allowed for all five to be detained for the next ten days as the prosecution concludes investigations. 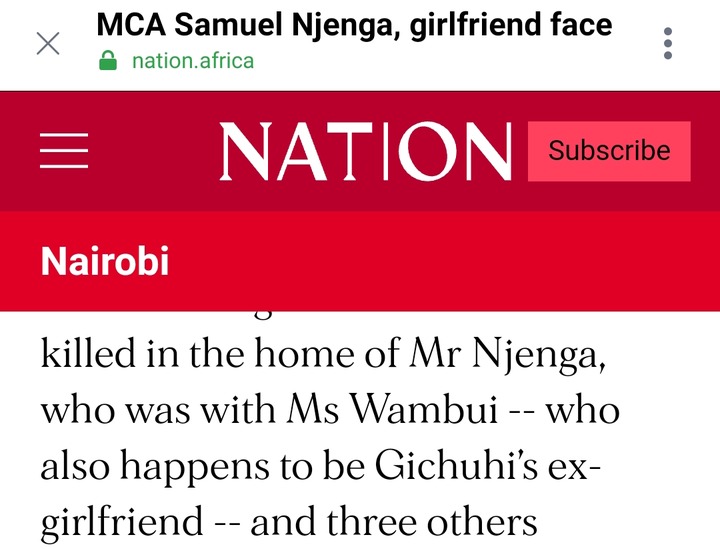