By @arapoutta (self media writer) | 10 months ago

Nine people are reported to have been left nursing injuries after an accident along Kangundo road in Nairobi County. 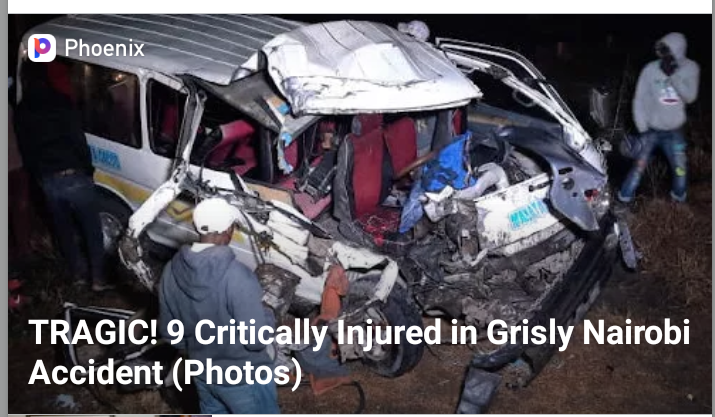 According to the Kayole sub county police Commander Paul Wambugu, the victims got critically injured after the vehicles they were travelling in, a passenger matatu and minibus had a head on collision between Kamulu and Joska area on Friday. The incident took place at around 7.20 pm.

“There was an accident between a bus and matatu. The matatu was overtaking when the two vehicles engaged in a head-on collision." Wambugu said on Saturday.

According to the report, the matatu, which took off from Tala to Nairobi, belonged to Makamata Sacco while the bus, which was heading to Tala from Nairobi, operates under KAM Sacco.

“The nine casualties were reported to have sustained serious injuries and were admitted to Ruai Family Hospital where they are undergoing medication. There was no reported fatality reported during the accident." He added.

However, Wambugu said that he had dispatched some police officers to Ruai Family Hospital to check on the health status of the casualties.

According to the eyewitnesses, the matatu driver lost control of the vehicle leading to the accident.

"I was travelling from Kiumbu in Kisii County but boarded the bus in Nairobi Town. When we got to this place, we saw the matatu swerving on the road. The bus driver stopped his vehicle after sensing a possible accident. The matatu rammed into the bus head-on." Daniel Kiricha, an eyewitness said.

"The matatu driver broke his leg, a child broke his arm, while a boy broke his leg too. Other passengers also sustained injuries." He added.