End Of Days For A Boy Aged, 15 As He Gets Beaten Mercilessly By The Angry Locals Over Theft

By LoneWolf_7 (self media writer) | 7 months ago

Theft cases have been on the rise lately. With it ranging from bank robberies to minor robberies in the village. A theft incident was reported in Milford County. 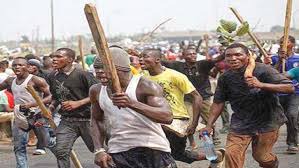 A Shamba Boy, aged 15 has been grasped out of an angry mob who were almost killing him. As sources say, the boys were cornered by the mob while they were trying to get away with the stolen item s. Swami, the victim was from Oruba, Suna West, Migori County. After planned theft, the kids decided to rob a neighbor's house.

Lucky for them, they managed to get in. Spend some few minutes picking whatever they believed was valuable. However, things got pretty ugly when they were escaping. The locals spotted them and intercepted them. The rest of the boys managed to outrun the mob except Omwami.

He was beaten mercilessly by the mob to the near-death. Thank God police arrived and saved the boys from the exasperated mob who seemed determined to end the life of the boy.

He was taken to the Police Station waiting while the police are investigating the whole theft.

Content created and supplied by: LoneWolf_7 (via Opera News )