According to reports, a woman in Trans Nzoia County fatally stabbed her husband after an argument about Ksh 100. According to sources, the late spouse spent the money on smokes even though it was intended for meals. 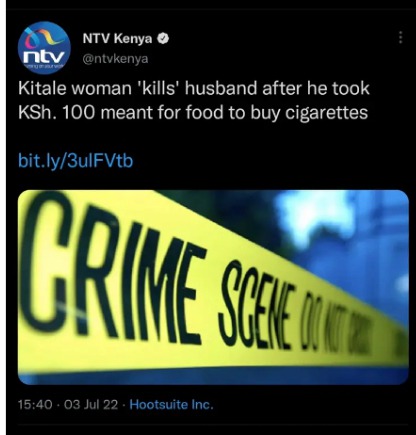 According to the Nyumba Kumi official, the woman narrowly avoided being lynched by the people. According to reports, the husband was taken urgently to Kitale County Hospital. Sadly, he was already dead when they got there.

The unfortunate tragedy was confirmed by the Trans Nzoia County Police Commander, who also announced that an investigation had been opened. In these difficult economic times, the Commander also challenged Kenyans to come up with better solutions to their concerns.

In the moment, the woman is at the Matisi Police Station. She will be charged on Monday. Her late husband's remains was sent to the Kitale County Hospital Mortuary, where a post mortem would be performed. May he rest in peace, his soul.