Nothing tops off a beautiful Sunday like a movie-like tale of real Kenyans who have surmounted real obstacles to attain very great fetes that were once thought to be impossible for them.

Imagine a young boy who was born totally blind in a certain village in Mumias. His parents separated after his birth, because of his condition. His only guardian, the grandmother, dies when he is just 5 years old. He got cerebral malaria and attempted suicide twice, once by taking rat poison and by trying to get hit by a car on a busy highway. 21 years later, he calls his mother to tell her that not only can he see, he can drive a car and is training as a pilot in Nairobi. This is the story of Daniel Odongo, who throughout his 20 years of blindness, never for a single day prayed to God for his sight. 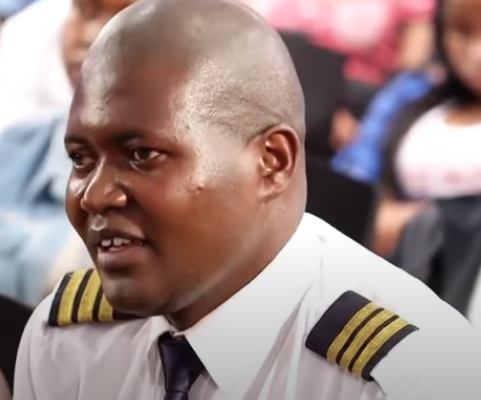 Born on 24 August 1982, Odongo was brought up a Catholic Church nun was took pity on him after the death of his grandmother, who was the sole guardian after being abandoned by his parents. He went to Kibos School For The Blind, where he scored 351 marks in his Kenya Certificate of Primary Education (KCPE) exams in 2006. He then went to Thika School for The Blind, from where he managed to secure a university admission.

In his second year in campus, he developed cerebral malaria, which was coupled with depression, making him attempt suicide twice. After taking Rat N Rat poison, he changed his mind and drunk soapy water, which managed to keep him alive until he was taken to hospital. He later went on Ngong Road in an attempt to get hit by a car, non hit him. Remember that he was blind at this time and using his white cane, which the drivers probably noticed.

On being taken for treatment at the Kikuyu Eye Hospital, Odongo was asked to go back for further treatment after his cerebral malaria was healed. A nurse their insisted that he goes for eye surgery, which he was absolutely opposed to. He had no faith in being able to see, a fact which is ironical since he always told his friends at school that he was sure he would become a pilot some day.

After consistent persuasion, Odongo told the nurse that his only hope was that after the operation, the hospital would not detain him for the hospital bill, because he had no money, and neither did his community in Mathare. On reaching an agreement with the hospital, he went under the knife, in an operation that required 5 doctors and ended at 5 p.m, after kicking off at 6 a.m.

The next day, after his bandage was taken off, his left eye had some vision, but he told the doctors that he could not see anything. He explained this, in an interview with Tamima on Switch TV in 2020, claiming that if he had said that he could see, he would be put under so much pressure, yet he was used to being blind. Believe it or not, it took him 4 whole months before telling anyone that he could see. During this period, he used to meet up with primary school kids in Mathare, who would teach him what they learnt in school, like alphabets, numbers and colours.

In 2014, he went back to thank the doctors, who had no idea he had been healed. They decided to put him through another eye procedure, which this time enabled him to see through his right eye. Fast forward to 2019, he had obtained his Private Pilot's License (PPL). At this point you would think that his journey was smooth after regaining his sight, but you are wrong.

While on a flight from Nairobi to Mombasa, Odongo refused to come off the plane, insisting that he wanted to speak to the pilot. After a lengthy argument with the plane's crew, the pilot finally came out of his cabin to listen to him. He made his argument very short and precise, "I was born blind and staid blind for 20 years. I can now see and want to be a pilot," The pilot, who was called Duke, was very moved and asked Odongo to meet him at the Wilson Airport the next day. This marked his start in aviation.

In order to gain a PPL, you need to do a Ground's School course that cost 40,000 shillings. You will then need training in a simulator and later you will actually need to fly a small plane, which costs over 20,000 shillings per hour. An average PPL will set you back around 2 million shillings.

At this point you will think that Odongo probably had a sponsor for his course, which is not true. He actually took to selling executive pens at 100 shillings each, in offices in Nairobi, in order to raise his fees. In 2018 however, he met Mama Ngina Kenyatta who paid for a few hours of his training. He took back to selling pens nontheless.

When speaking to Tamima, Odongo was pursuing his Commercial Pilot's License, but was so frustrated after his brother spoke to the media claiming that Odongo had faked his university admissions letter. This caused some of his donors to pullout, making him rely solely on selling pens for his upkeep and flight training.

I do hope that he completed his course, and can some day tell his full story, which will touch generations of young Kenyans, who are living with disability.

Photos: How ODM Leader Arrived In Gilgil, Nakuru County For A Church Event

Air port Drama After A Kenyan Plane Was Forced To Land, Minutes After Setting Off, For This Reason