By PolyNewsKenya (self media writer) | 1 month ago

Thursday was bad day for Martha Karua after her much anticipated and planned rally in Kisii was disrupted by a police officer who caused panic after he fired teargas in the venue of the meeting. The incident happened just a few seconds after Martha Karua stepped on state to address the people. Because of fear, she had to end her rally prematurely. 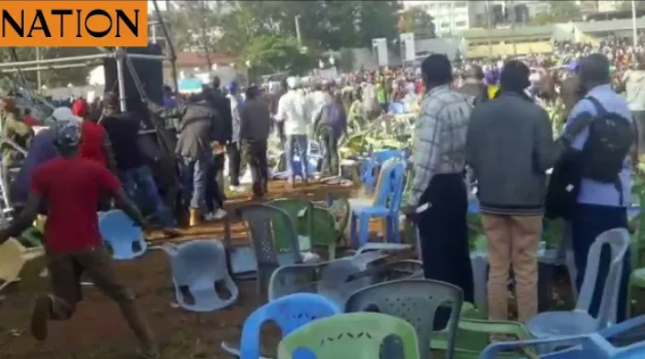 After she greeted the people, an explosion was heard before smoke started spreading through out the venue of the meeting. The people started running to avoid the effects of the teargas. Martha Karua was taken to safety and boarded her plane back to Nairobi. She did not get a chance to address the people as planned.

The officer behind the shooting has been arrested and will be charged in court for causing panic in a public event. He could have caused injuries and even deaths by frightening the people. Police detectives arrived at the venue of the event and took samples of the teargas that remained to be used as evidence against the officer. Martha Karua will now have to plan another meeting to make up for the disrupted rally.

BREAKING: Cristiano Ronaldo Cautioned By Police After What He Did To Everton's Fan At Goodison Park

Chebukati Orders Arrest Of People Who Attacked Him At Bomas