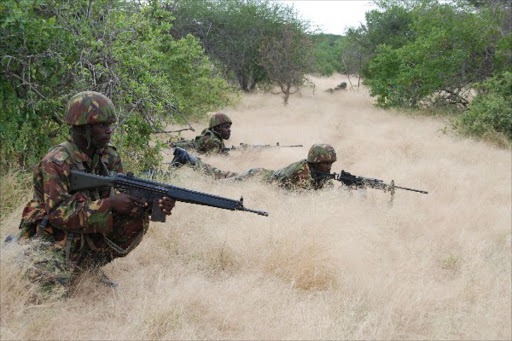 An innocent man/herder was shot, killed by bandits and his thirty cows stolen at Wangwachi area which neighbors the Laikipia Nature Conservancy bandit hotspot.

After the incident, Ol Moran residents and Kenyans at large have continued to aske questions why four bandits confidently attacked and shot a man with police officers only 500M away.

A man who was herding together with Mr. Maina ( man shot by bandits) disclosed to the media that officers in the area had diverted their attention to digging a trench along the conservancy. According to the man, the officers may have failed to notice or hear the gunshots as a result of the noises from the craters and other movers that are being used to dig the trench along Wangwachi - Kamwenje road.

The witness who claimed to have seen the four gun wielding bandits said that he escaped from their jaws by crawling in the thick thickets before moving his herd to a safer location. According to him, the officers would have seen the bandits only if they had turned around and looked across the deep woods.

Three days, the Laikipia operations commanding officer, General Assava launched the construction of a trench along the Laikipia Nature Conservancy by KDF engineers from the 12th battalion. The trench being dug along Wangwachi - Kamwenje road will play a big role in preventing illegal herders from accessing the conservancy. This road is mostly used by herders to illegally sneak their livestock into the conservancy. The government is dedicated to ending banditry in Laikipia disturbed areas.